Dr. Fauci's team tried to scrub this from the internet - The Horn News 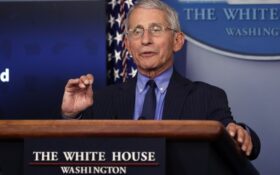 The controversy surrounding Dr. Anthony Fauci’s emails and his leadership during the coronavirus pandemic continues to grow.

Critics of Fauci accuse the nation’s leading infectious disease expert of using his rising fame to cover up growing scandals.

Fauci says his emails, released by BuzzFeed News after a Freedom of Information Act request, are being taken out of context and misconstrued.

And during the height of the controversy, Fauci’s team quietly tried to scrub the listings from his upcoming autobiography from online booksellers Barnes & Noble and Amazon.

One of Fauci’s most vocal critics, Sen. Rand Paul, R-K.Y., responded to the removal on social media.

“Oh, I don’t know,” Paul joked. “I think they should publish it. I love science fiction.”

A stunning Wall Street Journal report in late May revived the lab leak theory — the possibility that the deadly coronavirus pandemic came from Communist China’s Wuhan Institute of Virology, and not from an accidental animal-human transfer — and forced mainstream media outlets like The Washington Post to correct prior articles dismissing the theory as a far-right “conspiracy theory” and calling it “debunked.”

Critics have said the release of 3,324 emails from and to Fauci at the height of the pandemic “depict an arrogant, dismissive physician who from the very start began to cover for his potential role in the lab leak theory, going as far as to brand himself the most credible voice in the world on COVID to do so.”

In an interview with CNN’s John Berman on Thursday, Fauci dismissed his critics’ accusations as “nonsense.”

“I don’t even see how they get that from that email. I have always said, and will say today to you, John, that I still believe the most likely origin is from an animal species to a human. But I keep an absolutely open mind that if there may be other origins of that, there may be another reason, it could have been a lab leak,” he said.

“I believe if you look historically, what happens in the animal-human interface … the more likelihood is that you’re dealing with a jump of species,” Fauci said. “But I keep an open mind all the time. And that’s the reason why I have been public that we should continue to look for the origin.”

“You can misconstrue it however you want — that email was from a person to me saying ‘thank you’ for whatever it is he thought I said, and I said that I think the most likely origin is a jumping of species,” he continued.

“I still do think it is, but at the same time as I’m keeping an open mind that it might be a lab leak.”

Is there a massive cover-up between the media and Fauci’s team?

Or is this all being taken out of context? Vote here —