Down to the wire! Budget meeting is scheduled - The Horn News 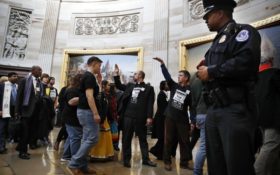 President Donald Trump and congressional leaders have scheduled a summit to begin sorting out their budget differences, top lawmakers and the White House said, as a clash that could produce a partial government shutdown by the weekend hung in the balance.

The meeting, set for Thursday at the White House, comes just a day before federal spending expires that’s needed to keep agencies functioning beyond midnight Friday night. Complicating the search for a pact are disputes over immigration, health and other issues folded into the year-end mix.

The conservatives said they worry that a vote on the spending measure before Christmas — when lawmakers are desperate to get home — would give Democrats more leverage to boost the package’s price tag. In a brief drama, around two dozen of them withheld votes for a procedural measure advancing the GOP’s prized, separate tax bill until House Speaker Paul Ryan, R-Wis., agreed to talk to them further about their concerns, said Freedom Caucus chairman Mark Meadows, R-N.C.

The GOP will need Democratic votes to push the spending bills through Congress, another reason the pathway is unclear for averting a closure just weeks before the start of the 2018 election year. Even so, top Republicans expressed confidence that they’d approve the short-term measure this week, with Senate Majority Leader Mitch McConnell, R-Ky., saying, “We will pass it before the end of the week.”

Hours before Trump and Capitol Hill leaders were to hold a budget meeting last Tuesday, House Minority Leader Nancy Pelosi, D-Calif., and Senate Minority Leader Chuck Schumer, D-N.Y., abruptly called off the session. The cancellation came after Trump took to Twitter to vilify their stances on taxes, immigration and crime and say he saw no prospects for an agreement, and the standoff has exacerbated bitter feelings on both sides.

“We hope the president will go into this meeting with an open mind, rather than deciding that an agreement can’t be reached beforehand,” the Democrats said Monday in a written statement.

The two Democrats pointedly said they’d accepted Trump’s offer to meet with them. And in what seemed an attempt to isolate the president, they said they hoped he’d be amenable to an agreement “as negotiations with our Republican counterparts continue.”

With the budget chafing under spending caps imposed by a 2011 bipartisan budget deal, Democrats want defense and domestic programs to get equal funding increases. Both sides say they want to provide money for a health insurance program that serves more than 8 million children and for states battered by recent storms.

Democrats and some Republicans are also demanding a plan to protect immigrants who arrived illegally in the U.S. as children.

Trump scuttled a program from President Barack Obama’s administration that protected them from deportation, and he gave Congress until March to work out a new agreement. Trump expressed a desire to work with Democrats to extend that program, called Deferred Action for Childhood Arrivals, but he and Republicans want border protection money in return and there have been no signs of progress.

Getting an immigration deal enacted in December would cause an eruption in House GOP ranks, where many conservatives oppose the idea.

In addition, some from both parties want to restore billions in federal payments to health insurers that Trump halted last autumn. There are also demands for money for battling opioid abuse.

Whatever the length of the initial short-term spending measure, it seems likely that a second temporary bill stretching into January would also be needed for a final pact addressing spending, hurricane aid and perhaps immigration.

For Republicans, such an agreement would unlock a huge budget increase for the Pentagon — perhaps $70 billion for the 2018 fiscal year alone. Democrats would likely win less for nondefense agencies.

The Senate approved its near $1.5 trillion tax legislation before dawn Saturday, while the House passed a similar measure in November.

GOP leaders hope to send Trump a final tax package before Christmas, and there’s a growing consensus that they have a strong chance to succeed. Both chambers’ bills give the bulk of their tax breaks to businesses and wealthier people and are headlined with a cut of the 35 percent corporate tax to 20 percent. They have modest differences over items like whether to reduce or fully repeal the tax on the most expensive estates.