Don't throw out that beach towel, turn it into a bag! - The Horn News 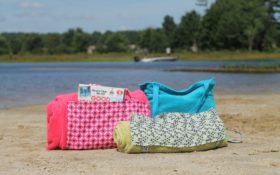 Summer is coming to a close, but don’t throw in the towel just yet. Carry it to the beach or pool in style.

I admit, I sent my son to day camp for five weeks this summer with a rather ratty towel crammed into his backpack with his swimsuit, lunch and water bottle. But when I imagine squeezing in a beach day for myself, I’d much rather have a thick towel, preferably padded with a pillow, that can also corral my sunscreen and book and can be slung over a shoulder. So I tested three methods for upcycling towels to make them easier to carry. One folds up into a backpack, one into a tote bag, and the third into a more simple sling.

Here’s what I found, with each method rated from 1 to 10, with 10 indicating the least expensive, easiest and best results:

This method, found on the Craftaholics Anonymous website, involves sewing lengths of cotton strapping or belting to a hand towel, folding it in half to make a pocket and then sewing it to the top edge of a beach towel or oversize bath towel. The long sides of the large towel are then folded in toward the center. The towel is rolled up from the bottom and can be stuffed into the pocket, creating a compact bundle with straps that allow it to be carried like a backpack. There’s also enough room in the pocket to tuck in a few small items, such as keys, sunglasses or maybe a magazine.

Though the other methods are a bit more stylish because they incorporate other fabric, this was by far the easiest and quickest of the three techniques. One caveat: The original instructions call for straps that are just 10 inches long. This results in a backpack that could only be worn by a fairly small child. I ended up increasing the length to about 22 inches and found that to be just about right for my frame.

The towel-into-tote tutorial at a blog called More Like Home was more my style: It includes a pillow at one end of the towel and folds up in such a way that there are plenty of pockets in which to stash reading material and other items. This technique also results in a slightly longer towel on which to lounge because it involves two large bath towels. One towel is cut in half, folded and sewn together to make a pillow case. The case is then sewn to the second towel and stuffed. I, however, took the advice of one of the blog commenters and instead of stuffing the pocket with fiberfill, I just folded up the unused half of the first towel. That way, it can be removed to be used as an extra drying-off towel at the beach or as a pillow.

Pockets and straps are sewn to the backside of the towel, and when it is rolled up, the pockets end up along the sides of the bundle.

This method took the longest time and was the most difficult, as it involved covering the cut edge of towels with fabric, making straps and pockets, and adding hook-and-loop tape to hold the top of the tote together when it’s all rolled up. It also was the most expensive because it involved purchasing two large towels plus a yard of fabric, though it did produce the fanciest result.

The third project comes from the blog of fabric designer Anna Maria Horner, and unlike the other two, doesn’t include any way to carry other items — though you certainly could roll up a swimsuit in the towel. But the result also is less bulky and more streamlined, so if your goal is to just keep your kid from dragging a towel on the ground, this is the way to go.

This method involves sewing a wide sleeve of fabric to the top edge of a towel, and adding two straps — one short loop and one long loop. When the towel is rolled up, the long loop slips through the shorter one, holding the towel in a neat roll and creating a long handle that makes it easy to carry.

It was trickier than expected to fit the bulk of the towel into the sleeve of fabric and sew through it smoothly, but otherwise this was a fairly easy project. It also was the cheapest, requiring just one towel and about three-quarters of a yard of fabric.