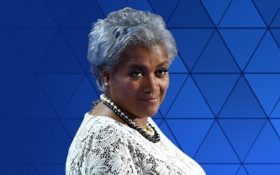 One of the Democrats most controversial figures just had another slip-up — and this one is major.

With the threat of a serious winter storm striking the Northeast, well-known Democratic leader and Clinton insider Donna Brazile decided to announce her intention to make the life-threatening weather political.

#43 twisted with Katrina, #44 soaked in Sandy. Will #DonaldDumpStella? Can 40 million ppl find #Stella sobering under #45 leadership?

Implying that protecting the lives of thousands in a natural disaster is some kind of competition between presidents, is Brazile hoping that Donald Trump fails in keeping our nation’s citizens safe during the storm?

While the mainstream media largely ignored Brazile’s tasteless tweet, other Twitter users wouldn’t lett her get off so easily.

One user poked fun at her previous scandal of providing CNN debate questions to failed Democratic nominee Hillary Clinton’s campaign prior to the presidential debate.

All jokes aside, the weather system moving in to the mid-Atlantic and parts of the Northeast could prove extremely dangerous.

The National Weather Service issued a blizzard warning from late Monday night through Tuesday evening for the millions of Americans living in New York City and parts of northern New Jersey and southern Connecticut, while winter storm warnings and watches were issued for the remainder of the Northeast.

Meteorologists said the storm could dump 12 to 20 inches of snow on New York City and pack wind gusts up to 55 mph.

“We’re preparing for a significant storm on Tuesday, and New Yorkers should also prepare for snow and dangerous road conditions,” de Blasio said.

The weather about-face comes a week after the region saw temperatures climb into the 60s.

“This would certainly be the biggest snowstorm of the 2017 winter season in New York City,” said Faye Barthold, a weather service meteorologist based on Long Island.

Boston also could get 12 to 18 inches, with isolated amounts of up to 2 feet across northeastern Massachusetts.

In Philadelphia, crews began treating some area roadways on Sunday. The city could see 6 to 12 inches of snow. The weather service said there is a chance the snow could change over to a wintry mix or rain for a time Tuesday morning, which could limit total snowfall amounts.

The 1 Man Who Can Unify America [sponsored]

Farther south, in the nation’s capital, where the National Cherry Blossom Festival is scheduled to start Wednesday, snow accumulations of 6 to 8 inches are expected. Also, the forecast calls for 12 to 18 inches of snow in Hagerstown and Westminster, Maryland, while Baltimore is expected to get 8 to 12 inches. In Delaware, Wilmington could see 11 inches.

As the East prepped, the storm marched through the Midwest, forcing a number of flight cancellations and dropping measurable snowfall on some sections for the first time in months. In Chicago, the forecast called for 3 to 6 inches of snow, the city’s first significant snowfall since mid-December.

Southern portions of Minnesota have been hit hard, with more than 9 inches of snow in some areas. In Michigan, up to 4 inches of snow was predicted as utility crews worked to restore power to those still without electricity following high winds that hit the state on Wednesday.