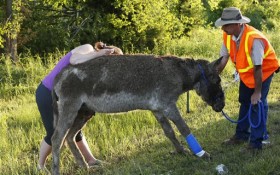 It wasn’t a routine day for a sheriff’s officer after she spotted a donkey meandering along Interstate 90 near Chicago.

Video from a body camera taken Wednesday shows the bewildered Cook County officer radioing: “There’s a donkey in the middle of I-90.”

The officer then ordered the donkey to “come here, sweetie.”

She asked a motorist to stand with the donkey while she could figure out what to do.

The officer also asked the donkey where it was from. It turns out the animal’s name was Dusty, who was eventually returned to its owner.