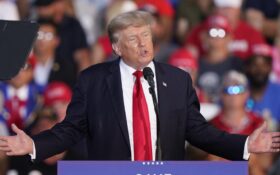 The House Ways and Means Committee voted along party lines to release former President Donald Trump’s tax returns — and CNBC had an early breakdown of what the release will contain.

Trump’s income totals, deductions, and the taxes he and wife Melania paid while serving in the White House have already been released by the committee.

The information is the culmination of a yearslong fight between Trump and Democrats that has played out everywhere from the campaign trail to the halls of Congress and the Supreme Court.

Democrats on the tax-writing Ways and Means Committee argued that transparency and the rule of law were at stake, while Republicans countered that the release would set a dangerous precedent with regard to the loss of privacy protections.

“Over our objections in opposition, Democrats in the Ways and Means Committee have unleashed a dangerous new political weapon that overturns decades of privacy protections,” he told reporters. “The era of political targeting, and of Congress’s enemies list, is back and every American, every American taxpayer, who may get on the wrong side of the majority in Congress is now at risk.”

Trump spent much of Tuesday evening releasing statements on his social media platform that were unrelated to his tax returns. The IRS didn’t immediately respond to a request for comment.

Trump has previously argued there is little to learn from his tax returns.

“You can’t learn much from tax returns, but it is illegal to release them if they are not yours!” he complained on his social media network last weekend.