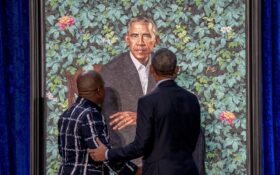 And just like in 2017, former President Barack Obama is being pushed aside once again to make way for the billionaire-turned-politician.

The Smithsonian National Portrait Gallery has just updated its “America’s Presidents” exhibition, home to portraits of every U.S. president since George Washington. The most recent president not in office occupies a special place in the exhibit – and that’s where Trump made his “return,” with an image of the 45th president replacing one of the 44th.

“There’s always a sense of transition when we install a new presidential portrait,” curator Dorothy Moss told the Washington Post. “We are a museum that reflects art history and biography, and we are able to celebrate the presidents with portraits that are historical documents.”

The image they chose was snapped by photographer Pari Dukovic, who was on assignment for Time magazine, and shows Trump sitting at the Resolute Desk on June 17, 2019.

But unlike most images of Trump from the Oval Office, which are often taken from the front of the desk, this one was taken from Trump’s right and almost a little behind him as he turns toward the camera.

“It is an angle we don’t often see. You get a little bit of the other side and what’s behind the desk,” curator Leslie Ureña, told the Washington Post. “We want to not only depict the individual, but also bring as much history, as much context as possible.”

When @smithsoniannpg reopens on May 14 after being closed because of the Covid-19 pandemic, it will do so with a new work—a photograph of former President Donald J. Trump. https://t.co/9CabPvVg5d

Behind Trump are the flags of each branch of the military. From left to right: the Army, Marine Corps, Navy, Air Force and Coast Guard. There are also portraits within the portrait, an 1835 painting of President Andrew Jackson by Asher B. Durand, as well as a portrait of Benjamin Franklin by Joseph Duplessis.

Images online show the photo’s front-and-center location within the exhibit:

It’s one of five portraits of Trump in the gallery’s permanent collection, but is not the “official portrait” that all former presidents receive.

The Washingtonian reported in March that the gallery is still in talks with the former president and Melania Trump about those formal likenesses, which can take up to two years to commission and create.

The portrait of Obama that was in that location is hitting the road… literally. That image – Obama’s official portrait, painted by artist Kehinde Wiley – will tour the nation from this summer through next spring along with the official portrait of Michelle Obama by Amy Sherald.

A different image of Obama – the famous “HOPE” poster by Shepard Fairey used during the 2008 presidential campaign – will be inside the exhibition, in the section devoted to contemporary presidents.

While the gallery is currently closed due to COVID-19 restrictions, it’s expected to reopen on May 14.

They may want to add extra security, as any attempt to even acknowledge Trump has often been met with rage and violence by the left.

In San Antonio, Louis Tussaud’s Waxworks – owned by Ripley’s – had to move its Trump figure into storage as tourists keep messing with it.

“When it’s a highly political figure, attacks can be a problem,” regional manager Clay Stewart told the San Antonio Express in March.

And in Florida, a Trump figure at Walt Disney World’s Hall of Presidents was so controversial that the theme park added decorative “spikes” to the stage to prevent angry leftists from attacking the figure… and the show has been at times interrupted by people yelling at the robot.

That attraction is currently closed, presumably while it awaits a Biden-bot.