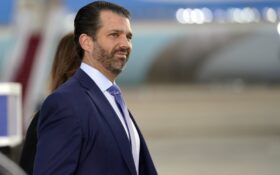 Wyoming lawmakers rejected a measure that would have required candidates to win a majority of votes in primary elections to avoid runoffs — a change endorsed by Donald Trump Jr. in his campaign to defeat Republican U.S. Rep. Liz Cheney.

The state Senate defeated the proposal with a 15-14 vote Wednesday after lawmakers raised concerns over the cost of adding more elections and the burden that doing so would put on voters and local officials.

Trump Jr. called for Cheney’s defeat after she voted to impeach President Donald Trump over the storming of the U.S. Capitol by a mob on January 6th.

A primary runoff for Cheney could have consolidated Republican opposition to her re-election. She didn’t take a position on the proposed election law changes.

The state GOP central committee censured Cheney in February for her impeachment vote. But for the most part, Wyoming’s Republican elected officials have continued to support her.

In her first run for U.S. House in 2016, Cheney won a nine-way Republican primary with just short of 40% of the vote while the runner-up got 22%.

“That’s not exactly what you would call a mandate,” said Sen. Bo Biteman, a Republican and sponsor of the election bill. Biteman on the Senate floor listed Cheney’s race and others in which Republican victors got less than half the vote, the Wyoming Tribune Eagle reported.

“There’s a lot of people out there that don’t think that that’s right. They want to send our nominee off to the general election with a mandate of the majority of the party’s support.”

But the cost of the measure was a turnoff for lawmakers confronting declining state revenue from Wyoming’s key coal, oil and gas sectors, which have led to steep state and local budget cuts.

One lawmaker said his constituents were “appalled” that could be subjected to more elections.

“I haven’t really heard a great reason for changing 130 years of history yet,” said Sen. Ed Cooper, R-Ten Sleep. “I think there may be merit to it, but there may not be.”

“Let’s do it right, let’s do an interim study,” he added.