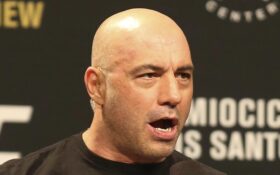 Joe Rogan, who commands a massive online audience of millions as the world’s most popular podcast host, is known for talking to nearly anyone… especially those who’ve been “canceled” by the left.

But there’s one guest he now says he’ll never have on his show: Former President Donald Trump.

“By the way, I’m not a Trump supporter in any way, shape, or form,” he announced on his Spotify podcast this week. “I’ve had the opportunity to have him on my show more than once. I’ve said no, every time. I don’t want to help him. I’m not interested in helping him.”

Rogan, however, also had some harsh word’s for Trump’s “resistance” and the tactics they’ve used to oppose him.

“When people look back historically about the division in this country, he’s such a polarizing figure that so many people felt like they could abandon their own ethics and morals and principles just to attack him and anybody who supports him because he is an existential threat to democracy itself,” he said.

But while he’s no fan of Trump, he’s also not fond of President Joe Biden, either.

He said Biden “was just rambling” during a recent appearance on late-night show “Jimmy Kimmel Live.

And because of that, he predicted that Trump would have a solid shot at winning in 2024 if both he and Biden run again.

“Well, he’s running against a dead man, you know?” Rogan said. “I mean, Biden shakes hands with people that aren’t even there when he gets off stage. I think he’s seeing ghosts.”

Rogan has in the past called himself “left on everything” and has backed Sen. Bernie Sanders (I-Vt.) as the Democratic presidential nominee in 2020.

He hasn’t indicated who he might support in 2024, but so far is leaning toward the opposite of Sanders in nearly every way.

“I think Ron DeSantis would work as a good president,” Rogan said last week. “I mean, what he’s done for Florida has been admirable.”

He specifically cited DeSantis’ handling of the COVID-19 pandemic – with is one of the areas that’s gotten Rogan in trouble with the left. He’s questioned some of the conventional narratives and interviewed guests with other points of view.

He apologized earlier this year and denied trying to spread “dangerous misinformation,” as some of his critics have charged.

He said he’s just looking for other opinions.

But that’s been labeled “misinformation,” especially by voices on the left.

“The problem I have with the term ‘misinformation,’ especially today, is that many of the things that we thought of as misinformation just a short while ago are now accepted as fact,” Rogan said.

He offered some specific examples.

“Eight months ago, if you said ‘if you get vaccinated you can still catch COVID and you can still spread COVID,’ you would be removed from social media, they would ban you from certain platforms,” he said. “Now, that’s accepted as fact.”

He said questioning homemade cloth masks used to be ground for being banned.

“Now that’s openly and repeatedly stated on CNN,” he pointed out, as experts now say only high-quality masks such as N-95 may stop the spread of the virus. “If you said, ‘I think it’s possible that COVID-19 came from a lab,’ you’d be banned from many social media platforms. Now that’s on the cover of Newsweek.”

Despite attempts to cancel him over that, Rogan’s show remains the top podcast on Spotify with more than 11 million listeners per episode.