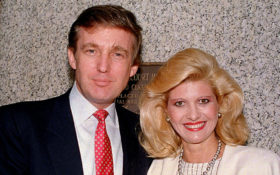 Former President Donald Trump spoke out about the untimely death of his ex-wife Ivana Trump, the mother of his three eldest children: Ivanka, Eric, and Donald Jr.

A longtime businesswoman and socialite in the Empire State, Ivana’s funeral was held Wednesday in New York City.

Trump flew into the city for the funeral and called The New York Post’s Cindy Adams on Tuesday night to reflect on his memories, his feelings, and his grief over the loss.

What he said was heartbreaking. Adams said Trump’s voice was low and he was reserved when he called.

“I’m here. I’m in New York. I’m feeling OK. I had some rest. A little sleep. But I’m sad,” Trump said in a brief phone call to the reporter.

“I’m just thinking how well you knew Ivana. You knew her very well. You knew her from the first. From the very beginning. From when I first met her. She was beautiful. She was special.”

“I know you and she liked each other from the earliest day,” he told Adams.

She said Trump paused before continuing.

“She was outstanding. Beautiful inside and out. We began all of it, our lives together, with such a great relationship,” he said.

“That she was different,” he said when asked about Ivana’s greatest attribute. “That she never gave up. Beautiful, yes, but she was also a hard worker. No matter how rough things were or how badly they looked she never fell down.”

“She went from communism to our lives together,” he said. “She took nothing for granted.”

Adams wrote that she asked if Trump was afraid we’d lose our country next.

“It’s horrible. We’ve never been at such a low point. That trip to Saudi Arabia? We have more oil than they have. This man in Washington is setting us all back. Setting everybody back,” he said.