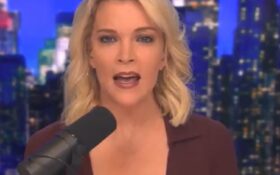 In 2019, a New York bartender named Dustin Hice accused CNN’s Don Lemon of sexual assault — and on Monday he came forward with graphic details of the alleged abuse.

Hice went on The Megyn Kelly Show to discuss his history with Lemon.

“He has his hand in his pants, rubbing himself aggressively,” Hice told Kelly. “With impunity, he just pushed his hand up under my face enough to thrust my head back and degrade me.”

Lemon maintains a home in the Hamptons, where he allegedly assaulted Dice in July 2018. He “categorically denies” the accusations, a CNN representative told USA Today in 2019.

In court records, Hice talked about suffering “severe emotional distress and loss of future earnings and opportunities.” In August 2019, he sued Lemon for damages and attorneys fees, including interest. His legal term plans to determine the precise amount at trial.

Hice’s team described Lemon as hypocritical, according to court records obtained by Mediaite.

On air and through social media platforms, Don Lemon… purports to be a staunch advocate for the “Me Too” movement, a social movement meant to bring awareness and give a voice to victims of sexual assault and sexual harassment

When the cameras are turned off, however, Mr. Lemon’s actions are in stark and disturbing contrast to the public persona he attempts to convey.

Lemon’s defenders have dismissed the accusation as baseless and financially motivated.

A CNN spokesperson told USA Today, “This claim follows his unsuccessful threats and demands for an exorbitant amount of money from Don Lemon.”

Hice said that Lemon remains protected because of his fame and money. “I’m just some nobody,” he told Kelly.

“Forgive my indelicate question,” she said. “So he was rubbing his genitals, and then he shoved the fingers that he was doing it with in your nose in your face?”

“When he touched your face, did he actually make contact with your face?” Kelly asked.

“Yeah. He pushed my face back completely,” Hice said. “At this point, I had turned around, and my back was to the bar. And he pushed me so forcefully that I was leaning up over the bar… I just ran out the back door. In certain circumstances, a lot of men would have acted aggressively… It’s either fight or flight, and I chose flight.”

“He has his hand in his pants rubbing himself aggressively, and he shoved his two fingers up underneath my mustache.”

Dustin Hice, who is suing CNN's Don Lemon over an alleged assault of a sexual nature, exclusively details the incident.