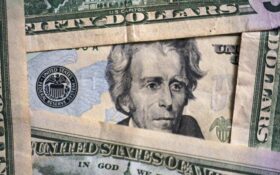 Rising inflation that has caused the biggest jump in prices in 40 years has spurred the Federal Reserve to aggressively raise interest rates, which increases demand for U.S. dollars. The U.S. dollar is also the world’s reserve currency and is considered a safe-haven in times of global economic stress.

The U.S. Dollar Index, which tracks the value of the dollar versus the Euro, Japanese yen and other major currencies, is at its highest level in two decades. The greenback will likely remain stronger than almost all currencies through this quarter, said Mark Haefele, chief investment officer at UBS Global Wealth Management, in a note to investors.

The dollar’s gains come as investors pull back from technology stocks because of worries about rising inflation. The Euro lost value relative to the U.S. dollar as Russia’s invasion of Ukraine ramped up fears that rising energy costs will worsen and crimp economic growth in the 19-country eurozone. Europe relies heavily on Russia for natural gas. The conflict has also made key food commodities like wheat and corn more expensive.

China’s strict COVID-19 lockdowns of Shanghai and Beijing are also reviving fears that the virus pandemic still poses a threat to the global economy. The International Monetary Fund cut its growth forecast for China’s economy because of the impact on commerce from lockdowns.

The role of traditional safe haven has been behind the recent surge in the U.S. dollar’s value, but a slowing U.S. economy is likely to put that into reverse this year.

“The direction of the dollar is, as always, very difficult to forecast in the short run. However, in the long run, these economic forces should prevail, pushing the greenback down,” said David Kelly, chief global strategist at JPMorgan Funds.