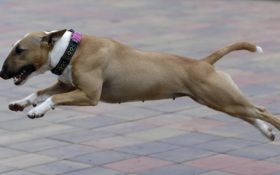 Officials say Florida firefighters used the Jaws of Life to free a Rottweiler that got her head stuck in a cinder block.

Officials say the 6-month-old dog named Fifi had managed to wedge her head inside one of the block’s holes while sniffing around the home. The resident called rescue workers after failing to free the dog.

Deputies arrived first and attempted to free Fifi with soap and water. When that didn’t work, firefighters used the hydraulic tool to break the block into pieces.