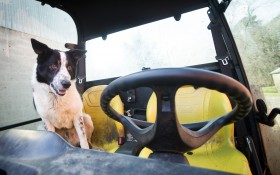 Don’t leave THAT pooch alone in the car anymore. Police say a dog alone in a pickup shifted the truck into gear, causing the vehicle to drive into a lake in Maine. The dog was rescued shortly after.

Ellsworth Police say a man was walking the dog near Branch Lake on Saturday afternoon in Ellsworth. He put the dog into the truck after an encounter with another dog.

While the man spoke to the other dog’s owner, the Yorkshire terrier managed to bump the Chevrolet Silverado into gear, causing it to roll about 75 feet into the lake, and bounce off a rock before sinking in roughly 10 feet of water.

Police say a family friend immediately swam into the lake and saved the trapped dog. A towing company was called in to remove the truck. No humans or dogs were injured.