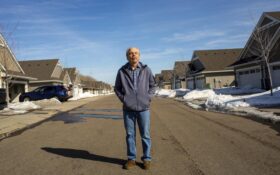 High-risk COVID-19 patients now have new treatments they can take at home to stay out of the hospital — if doctors get the pills to them fast enough.

Health systems around the country are rushing out same-day prescription deliveries. Some clinics have started testing and treating patients in one visit, an initiative that President Joe Biden’s administration recently touted.

The goal is to get patients started on either Pfizer’s Paxlovid tablets or Merck’s molnupiravir capsules within five days of symptoms appearing. That can prevent people with big health risks from growing sicker and filling up hospitals if another surge develops.

But the tight deadline has highlighted several challenges. Some patients are delaying testing, thinking they just had a cold. Others have been unwilling or unable to try the new drugs.

With vaccines and treatments available, “we can make this much more manageable in the future, if people are willing to take care of themselves,” said Dr. Bryan Jarabek, who helps lead COVID-19 treatment and vaccination efforts for the Minnesota health system M Health Fairview.

The Food and Drug Administration authorized the drugs last year. Doctors hailed the pills as a huge advance in the fight against COVID-19 partly because of their convenience compared to other treatments that require infusions or injections.

But patients can miss the pills’ short window if they dismiss symptoms like a headache or sniffles and wait to see if they go away before seeking help.

Stanford’s Dr. Thomas Lew said he’s seen high-risk and unvaccinated people who have waited more than a week. Some hospitalized patients on oxygen have told him they thought nothing of their first symptoms.

“They say everyone in the family decided it was a cold or allergy season is coming up, but it was COVID all along,” he said.

People delay seeking help for many health problems, not just COVID-19, Lew noted. But when it comes to the virus, the doctor believes patients may not be aware of the tight deadline.

Even those who get tested quickly, however, sometimes refuse the pills, doctors say.

Jarabek estimates that 30% to half of the patients who qualified for the antiviral pills turned down the treatments in his health system earlier this year.

He said some people didn’t consider themselves high risk or didn’t think they were sick enough to need the pills, which are free to patients. They also worried about side effects or how the drugs would interact with other medications.

Jeff Carlson couldn’t try Paxlovid when COVID-19 hit him in January because it might interfere with his heart medications. The 61-year-old suburban St. Paul, Minnesota, resident has Type 1 diabetes and heart disease.

A doctor asked him to try molnupiravir about three days after he started feeling symptoms. By then, Carlson couldn’t get off his couch. His fever had soared and he was struggling to breathe.

His wife picked up the prescription and a few days later, Carlson felt well enough to shovel snow.

“It turned me around basically in a matter of … pretty much 18 hours after I took the first dose,” he said.

Some health care providers have started free delivery services for Paxlovid or molnupiravir.

New York City has established a hotline patients can call if they test positive for the coronavirus. They can talk to a care provider if they don’t have a doctor and have pills sent to them if they are a good candidate.

The Mass General Brigham health system in Boston started a similar program that ships pills to some patients via FedEx.

Raymond Kelly received a package of Paxlovid about three hours after a doctor cleared him for the prescription last month. The 75-year-old Needham, Massachusetts, resident said he caught the virus despite being vaccinated and receiving a booster shot.

His doctor was on the phone with him minutes after the health system notified him that he had tested positive.

“It was all sort of blur because it was going on so quickly,” Kelly said.

Mass General Brigham aims to treat patients quickly and solve transportation problems with its program. Dr. Scott Dryden-Peterson noted that some COVID-19 patients may not be able to pick up pills, especially since they should be staying off buses and ride-sharing services.

“Transportation is not equally distributed in our society,” he said.

For patients with transportation, the drugstore chain CVS Health has started “test to treat” programs at its nearly 1,200 stores with MinuteClinic locations. Pharmacists cannot test and treat, so that program won’t happen at all stores.

Other retailers like the grocer Kroger also plan to test and treat at some locations. The Biden administration has called for federally qualified community health centers to do the same, but Health Secretary Xavier Becerra recently told The Associated Press that the “test to treat” initiative could be hampered by a funding impasse with Congress.

Chicago’s Cook County Health has run drive-through COVID-19 testing since the beginning of the pandemic. It is planning to pilot a program that adds treatments. Patients will be able to drive to one of the tents, get tested, wait about 15 minutes for the result and then talk to a doctor through telemedicine, said Dr. Greg Huhn.

With options for quick care growing, doctors and public health officials say now is the time for people to stock up on at-home tests.

Testing supplies that ran short during the omicron surge have since rebounded, said Neil J. Sehgal, a University of Maryland health policy expert. But he noted that future supplies also will depend on federal funding.

“It may not be the time to let your guard down,” Huhn said.