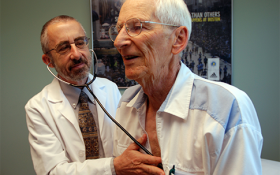 In a stunning turnaround last week, the nation’s biggest council of doctors refused to listen to their own leadership’s orders against patient murder-on-demand.

The American Medical Association vote shocked pro-lifers with the move; critics said it was a slap-in-the-face against the sanctity of innocent human life.

“Assisted suicide is not medical care,” Matt Valli of the Patients Rights Action Fund hit back, adding that doctor-prescribed suicide “puts vulnerable patients at high risk for coercion, mistakes and even abuse.”

Valli said that doctors caving to liberal pressure is “a failure to stand” and predicted it will have “grave consequences for everyone, but especially persons living with illness, disabilities” or the poor.

The AMA’s rules clearly say that “permitting physicians to engage in assisted suicide would ultimately cause more harm than good.”  The official rules go on to explain that “physician-assisted suicide is fundamentally incompatible with the physician’s role as healer.”

But death peddlers argue that poisoning patients is just part of “the art of healing.”  David Grube, the director of the suicide group “Compassion and Choices,” even boasted that he felt “heartened” by the vote.

Since the dawn of civilization, doctors have promised, “I will never administer a poison to anyone, even if beseeched, nor will I ever suggest such a course.”  Today, liberal physicians refuse to make that promise.

To make matters worse, the AMA quacks made themselves even more into murderers by giving their stamp of approval on dangerous self-induced abortion.

“Mail-order abortions” and “Telemed Terminations” without a doctor’s supervision have resulted in women dying.  A major study on “at-home” abortion drugs proved that serious and life-threatening complications are common “due to this practice.”

Right after promising never to kill, the physician’s promise states, “Similarly, I will not give to a woman a pessary to cause abortion.”  So much for listening to your elders.

Adding insult to injury, the very same doctors’ group that voted for suicide and abortion says its principles put “respect for human dignity and rights” first.

Even the AMA leadership’s report itself was wishy-washy.  It made a special point to say “thoughtful, morally admirable individuals hold diverging, yet equally deeply held, and well-considered perspectives about physician-assisted suicide.”

The report also said many doctors with “good faith” believe physician-assisted suicide is “an expression of care and compassion.”

Meanwhile, the country’s second-biggest group of doctors, the American College of Physicians, remains strongly pro-life.  “Physician-assisted suicide is neither a therapy nor a solution,” they say.  For a doctor to kill a patient “fundamentally alters the medical profession’s role in society.”

Even Hospice, long trusted to give dignity and care to the dying, is beginning to crack.  In 2016, the American Academy of Hospice and Palliative Medicine decided it was “neutral” on doctor-prescribed death, even saying other people besides the patient who want the patient to die should be listened to.

California, Colorado, District of Columbia, Hawaii, Montana, Oregon, Vermont, and Washington have legalized doctor-prescribed suicide. Montana and California laws are being challenged in the courts.

The lesson for us and all those who respect the sanctity of innocent human life is to make sure your doctor is pro-life, too.  It seems ironic that we would have to check that our physician wants to keep us alive, but in this wicked generation we have to.

Never throw away your right to life, such as by signing a “Living Will” or “End of Life Directive.”  Food and water are basic necessities and should never be cut off.

And for those so discouraged they despair of life, as well as for us when we grow deeply depressed, turn to loved ones for help (to live, not die!).  Remember the words of Jesus, Who’s example of patience in suffering saved the world, that “he who endures to the end will be saved.”