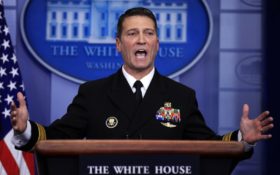 Navy doctor Ronny Jackson, who administered Trump’s first presidential physical last week, said Trump received a perfect score on a test designed to detect early signs of memory loss and other mild cognitive impairment. He also reported the 6-foot-3 president weighed in at 239 pounds — three pounds heavier than he was in September 2016, the last time Trump revealed his weight to the public.

“The president’s overall health is excellent,” said Jackson, who predicted Trump would remain healthy for the duration of his presidency.

“It’s called genetics,” Jackson said. “I don’t know. … He has incredibly good genes and that’s just the way God made him.”

Presidents don’t typically sit for cognitive assessments during their periodic physical exams. But Jackson said Trump personally requested the test as he continues to face questions about his mental acuity for office.

But the 71-year-old president performed “exceedingly well” on the test, Jackson said, receiving a perfect score.

“He’s very sharp. He’s very articulate when he speaks to me,” said Jackson, who works in close proximity to the president. Jackson accused doctors who have tried to diagnose Trump from afar of performing “tabloid psychiatry.”

Still, Jackson said Trump acknowledged he’d be healthier if he lost a few pounds by exercising more and eating better. Jackson said he’d be arranging to have a dietitian consult with the White House chef to cut calories and would be recommending a low-impact, aerobic exercise program for Trump, with the aim of shedding 10 to 15 pounds this year.

“I would say right now on a day-to-day basis, he doesn’t have a dedicated, defined exercise program,” said Jackson. “The good part is that, you know, we can build on that pretty easily.”

Trump’s body mass index, or BMI, of 29.9 puts him in the category of being overweight for his height. A BMI of 30 and over is considered obese. A copy of Trump’s New York driver’s license obtained by Politico listed Trump’s height as 6-foot-2, instead of 6-foot-3; the lower height would put Trump over the obesity threshold.

Trump’s blood pressure was 122 over 74, and his total cholesterol was 223, which is higher than recommended, even though he takes a low dose of the statin drug Crestor. Jackson said he would increase that dose in an effort to get Trump’s  “bad” cholesterol, or LDL level, below 120; it currently is 143.

Despite the diet and cholesterol concerns, Jackson stressed that Trump’s “cardiac health is excellent.” He passed a battery of heart exams, including a stress test that Jackson said showed an above-average exercise capacity for a man of his age, despite some calcium buildup in his arteries. He also takes a low-dose aspirin for heart health.

Jackson said Trump has avoided some big heart risks — he’s never smoked and isn’t diabetic — and has no family history of heart problems.

Trump last revealed details about his health two months before the November 2016 election, when he appeared on the “Dr. Oz” show to give details of a physical performed by his longtime physician, the eccentric Dr. Harold Bornstein. A year earlier, Bornstein had released a letter that predicted Trump would be “the healthiest individual ever elected to the presidency” if he won.

The Montreal Cognitive Assessment that Trump took includes remembering a list of spoken words; listening to a list of random numbers and repeating them backward; naming as many words that begin with, say, the letter F as possible within a minute; accurately drawing a cube; and describing concrete ways that two objects — like a train and a bicycle — are alike.

“It’s not a diagnostic test, but it’s pretty sensitive in picking up subtle changes in cognition,” things involving memory, attention and language but not mental health issues, said Dr. Ranit Mishori, professor of family medicine at Georgetown University, who performs these types of routine physicals.

Mishori said Trump’s vital signs, blood tests and physical examinations suggest “he seems to be on track, what you would want to see in a 71-year-old overweight male.”

But Mishori cautioned that despite good results on his cardiac exams, Trump is at increased risk of cardiovascular disease because of his age, weight, sedentary lifestyle and cholesterol level.