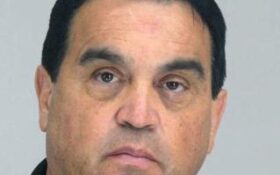 A Dallas anesthesiologist was arrested on charges alleging that he injected nerve-blocking agents and other drugs into bags of intravenous fluids at the surgical center where he works, which led to the death of a co-worker and caused cardiac emergencies for several patients, authorities announced Thursday.

Dr. Raynaldo Rivera Ortiz Jr. was arrested Wednesday on a criminal complaint alleging that he tampered with a consumer product causing death and intentional drug adulteration, according to a statement from the U.S. attorney’s office for the northern district of Texas. If convicted, he could be sentenced to life in prison.

Ortiz, 59, remained in the Dallas County jail without bond on Thursday. Records don’t list an attorney for him.

According to the criminal complaint, a 55-year-old female coworker of Ortiz experienced a medical emergency and died June 21 immediately after treating herself for dehydration with an IV bag of what she thought was saline taken from the surgical center. An autopsy found that she died from a lethal dose of bupivacaine, a nerve-blocking drug that is rarely abused but often is used when an anesthetic is given.

On Aug. 24, an 18-year-old male patient experienced a cardiac emergency during routine sinus surgery, was intubated and transferred to an intensive care unit. Chemical analysis of the fluid from a saline bag used during his surgery revealed the presence of bupivacaine, the stimulant epinephrine and the topical anesthetic lidocaine, drugs that could have caused the patient’s sudden symptoms, according to prosecutors.

The surgical center staff concluded that the incidents suggested a pattern of intentional adulteration of IV bags used at the center. They identified 10 additional unexpected cardiac emergencies that occurred during otherwise unremarkable surgeries between May and August, which was an exceptionally high rate of complications over such a short period, according to the complaint.

The incidents began two days after Ortiz was notified of a disciplinary inquiry of an incident during which he allegedly “deviated from the standard of care” during an anesthesia procedure when a patient experienced a medical emergency. Ortiz, who had a history of disciplinary actions against him, expressed concern to other physicians over the disciplinary action and complained that the center was trying to “crucify” him.

The complaint alleges that all of the incidents occurred around the time Ortiz performed services at the facility, but none happened while he was on vacation.

In one instance captured in the surveillance video, agents observed him walking quickly from an operating room to an IV bag warmer, placing a bag inside, visually scanning the empty hallway and walking quickly away. Just over an hour later, a 56-year-old woman suffered a cardiac emergency during a scheduled cosmetic surgery after a bag from the warmer was used during her procedure, according to the complaint.

In another instance recorded on video, agents saw Ortiz leave his operating room with an IV bag concealed in what appeared to be a paper folder, swap the bag with another from the warmer and walk away. Roughly half an hour later, a 54-year-old woman suffered a cardiac emergency during a scheduled cosmetic surgery after a bag from the warmer was used during her procedure.