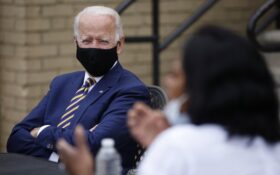 The Democratic National Convention is falling apart in realtime.

President Donald Trump and the Republican Party are planning a traditional celebration with all the usual fanfare to an arena full of delegates.

But the Democrats are going in the opposite direction as they plan a much more low-key affair in Wisconsin for former Vice President Joe Biden.

The official reason is the COVID-19 coronavirus and its restrictions on travel and gatherings.

But could there be another reason?

The Republicans are living amid the same pandemic – and working with the same restrictions. They moved their gathering from Charlotte after North Carolina’s Democratic governor couldn’t guarantee that he’d allow a large event in his state.

Now, the RNC is planning to hold its convention on more friendly turf in Jacksonville, Florida – and a Trump advisor told Politico that their grand event would be “a turning point for the president’s campaign and the start of an aggressive schedule just like you saw in 2016.”

But while Trump will address an area of ecstatic supporters celebrating his nomination, Biden’s event is sounding more like a school board meeting in the coronavirus era – a “remote” event as the DNC said its convention will go “virtual.”

The New York Times reports that while the convention will still be “anchored” to Milwaukee, it will no longer take place in the city’s basketball arena. Instead, it will “include both live broadcasts and curated content from Milwaukee and other satellite cities, locations, and landmarks across the country.”

Delegates are being urged to stay home, with voting and other convention business being conducted largely online.

Democratic National Committee Chair Tom Perez claimed the virtual event is a sign that they are “adapting” to the pandemic, and couldn’t resist the chance to take a shot at Trump.

“Unlike this president, Joe Biden and Democrats are committed to protecting the health and safety of the American people,” he said in a news release.

But critics are wondering if they’re protecting the people from the virus… or if they are trying to protect Biden’s carefully crafted image.

Trump and his team have been urging Biden to get out in public more, to speak more, hold more events and get more media coverage.

“I’d love to see him get out of the basement so he can speak,” Trump told Fox News last month.

The Trump campaign has called him “Hidin’ Biden” and accused him of avoiding the press so he won’t have to answer tough questions about his platform. They believe more Biden speaks, the less voters will like what they hear.

And of course, he’s also prone to gaffes.

“Americans are starting to question if Joe Biden is up to the challenge,” Trump campaign deputy press secretary Ken Farnaso told Fox News. “Team Trump stands with Team Biden in calling for equal coverage of his events, gaffes and all.”

Instead, their planned small “virtual” convention will allow them to continue that pattern of “Hidin’ Biden.”

There also might be another reason the Democrats were so quick to embrace a virtual event.

It’s not just Biden… but the state of the party itself.

In 2016, the mainstream predicted that the Republican National Convention would descend into chaos as party traditionalists attempt to wrest the nomination from Trump.

No such thing happened.

Instead, the real chaos took place at the Democratic National Convention, as supporters of socialist Sen. Bernie Sanders, I-V.T., jeered and shouted down featured speakers.

They have to be worried about it happening again as the party’s extreme left-wing rises in influence. This extremist faction has no particular love for Biden – and could make that known at a raucous in-person convention.

But can an in-person event stop the dissent?

With mass protests out in public and a huge leftist footprint online – especially on Twitter – it seems Biden’s strategy to avoid the limelight might not last much longer.