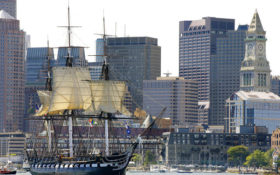 What could be harder than looking for a needle in a haystack? Probably retrieving a ring from a river.

But against all odds, divers with the Cambridge Fire Department managed to fish a Chicago woman’s diamond ring from the Charles River after it tumbled into the water while she and her husband were relaxing at a yacht club.

Lynn Andrews told WCVB-TV she had removed the ring on Sunday so she could apply sunscreen and placed it in her husband’s shirt pocket for safekeeping. But it was a hot day, and when he took off his shirt to cool off with a quick swim, the ring fell in the river.

“I said a bad word, and then I took a deep breath, and then I said, ‘Everything’s going to be fine,’” her husband, Ninos Andrews, told WBZ-TV.

Andrews “was obviously quite distraught,” the fire department said on its Facebook page.

The couple alerted a dive team that was patrolling the river, and within five minutes of searching, firefighter Jeremy Marrache located the ring and returned it to its “very relieved and excited” owner, the department said in its post.

“They all had wives, and they all knew how important this was and how sentimental it was to us,” Lynn Andrews said.

Fortunately, Marrache said, the ring lay at an angle that caused the diamond to shimmer as he shined his flashlight over the silty bottom of the river.

“We have open communications via our mask. So when I said I found it, the person attending us relayed that message, so I could hear everybody cheering,” he told WBZ.

“This is an amazing example of using our training for public service and a terrific opportunity for the dive team and marine unit members to practice working together,” fire Lt. Stephen Capuccio said in a statement.