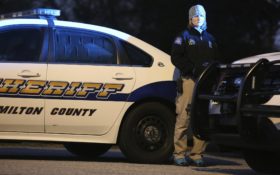 Tennessee officials say an officer who graduated from the police academy last month has been killed by a hit-and-run driver while checking on a hazard in a roadway.

A statement from the Chattanooga Police Department says 38-year-old Nicholas Galinger was struck Saturday night while on a call with his field training officer.

He was outside the patrol vehicle when a passing SUV hit him.

Police say Galinger was taken to a hospital, but died from his injuries.

Chattanooga Police Chief David Roddy says the community “lost not just an officer. We lost a son, a father, a friend, and a protector.”