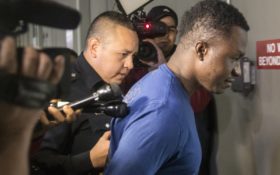 An Air Force major based in San Antonio bought a shovel, an ax, gasoline and a “burn barrel” a day after his wife was reported missing and then tried to destroy the receipt, according to investigators.

Andre McDonald, 40, was indicted Sunday on a charge of tampering with or fabricating evidence in the disappearance of his 29-year-old wife, Andreen McDonald, who police believe is dead, the San Antonio Express-News reported.

“It led us to believe that these were implements that were going to be used to dispose of a body,” Salazar said.

The find “really drives home to us: We believe that Andreen McDonald is no longer living,” he said.

Investigators also found pieces of a receipt that they accused Andre McDonald of having torn up, Salazar said.

“There was quite a bit of effort that went into destroying that receipt to try to prevent us seeing where (the evidence) was purchased,” he said.

Andre McDonald works at a cyberwarfare unit at the Joint Base San Antonio-Lackland.

Deputies have been searching wooded areas in north Bexar County for Andreen McDonald, Salazar said. Authorities haven’t questioned the couple’s 6-year-old daughter, who has autism and is mostly nonverbal, he said.

“The fact that this young lady, mom to this beautiful little child, is out in the woods somewhere quite possibly doesn’t sit well with me,” Salazar said. “I’m not going to rest until we find her and we get her back to her family.”

He said anyone with information on Andreen McDonald’s whereabouts should contact the department.