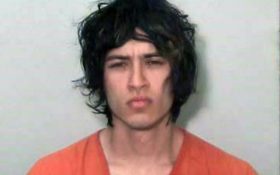 A Lyft rider in suburban Phoenix stabbed his pregnant driver, killing the woman and her unborn child before stealing her vehicle and driving nearly 150 miles before being arrested near the California line, authorities said Monday.

Tempe police said Kristina Howato, 39, was in her third trimester of pregnancy and is survived by two other young children.

They say Fabian Durazo, 20, was being held at a La Paz County jail on suspicion of two counts of first-degree murder and one count each of kidnapping and armed robbery, authorities said.

It was unclear Monday if Durazo has a lawyer yet who could speak on his behalf.

Howato was working early Sunday as a Lyft driver when she received a pickup request in west Tempe, said Sgt. Ron Elcock, a police spokesman.

Durazo allegedly attacked Howato when they arrived at an apartment complex about a half-mile away and he fled in her SUV.

Police officers responded to the apartment complex about 1:30 a.m. after receiving reports of a woman screaming in the parking lot.

They found Howato suffering from multiple stab wounds. She was transported to a hospital where both she and the unborn baby died.

Arizona Department of Public Safety officials used GPS tracking to locate the stolen SUV on Interstate 10 near Quartzsite, about 25 miles (40 kilometers) from the Arizona-California line and Durazo was taken into custody Sunday afternoon.

Police said they don’t believe Durazo and Howato knew each other and a motive for the fatal stabbing remains undetermined.

A statement from officials with San Francisco-based Lyft said: “We were shocked and deeply saddened to learn of this tragedy, and our thoughts are with the family and friends of the victims.”

Lyft says it is assisting with the investigation, adding that the passenger’s account has been permanently deactivated.