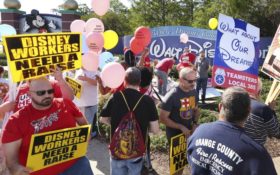 The proposed contract Walt Disney World’s unionized workers will vote on next week would increase the starting minimum wage by at least 46 percent over three years to $15 an hour, while enabling Disney to use more part-time workers and require new workers to stay in their positions longer before transferring, according to new details released Monday.

The proposed four-year contract would raise wages for existing workers by at least $4.75 an hour by October 2021.

A coalition of six unions representing Disney World workers is recommending that its members approve the deal, which was reached late last week after about a year of negotiations. An earlier proposal was rejected by workers last year. The contract covers costumed characters, bus drivers, launderers, retail workers, monorail drivers, custodians, housekeepers, servers, cooks, florists, makeup artists and lifeguards, among other workers.

“There is no question in my mind that our members are proud of this historical agreement and their vote will reflect that,” said Matt Hollis, the new president of the Service Trades Council Union, the coalition of unions.

If the contract is ratified, each Florida worker will receive a $1,000 bonus that Disney had paid to other employees after last year’s tax cut by Congress.

“I hope it’s a deal everybody likes. It took a long time and ultimately everybody came together and we will be making more money,” said Ed Chambers, who headed the Service Trades Council until recently.

The deal covers more than half of the 70,000 workers at Walt Disney World, which is the largest single-site employer in the United States.

Union activists all over the country have been pushing for a $15 an hour “living wage.” Disney’s wage decisions have historically influenced other employers in the tourism mecca of Orlando where the industry is competing for workers in a time of low employment. Last month, Disney agreed to raise the minimum wage for 9,700 employees at its California theme park resort to $15 an hour.

In a statement, Disney officials called the Florida deal “the largest proposal ever offered” by the theme park resort.

“We are thrilled our cast members will have the chance to vote on what is one of the highest entry-level service wages in the country,” said Robbin Almand, vice president of labor relations for Walt Disney Parks and Resorts.

In the proposal, the unions agreed to allow Disney to use more part-time workers. Under the current contract, slightly more than a third of the union workforce can be part-timers, but that would be raised to almost two-fifths of the workforce in the new deal.

New hires also would have to wait longer to switch jobs under the proposed deal. The current contract allows for a transfer after six months, but that would change to a year under the new contract.

The new contract also would expand the types of workers who could be subject to random drug tests to include lifeguards, fishing guides and employees who work with children, Hollis said.