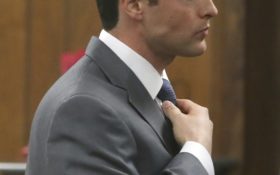 A Texas judge on Monday accepted a plea deal allowing a former Baylor University student accused of raping a woman at a fraternity party to avoid serving jail time, marking at least the third time the judge has approved lenient punishment for men accused of sexually assault.

Judge Ralph Strother accepted the plea deal for Jacob Walter Anderson, who was indicted on sexual assault charges and pleaded no contest to a lesser charge of unlawful restraint. A no contest plea means a person does not admit guilt, but will offer no defense. Anderson was expelled from Baylor after a university investigation.

The deal from prosecutors allowed Anderson to receive deferred probation. The ex-Phi Delta Theta fraternity president agreed to seek counseling and pay a $400 fine. Anderson will not be forced to register as a sex offender.

The woman said she felt disoriented after accepting a drink she thought contained punch at a 2016 fraternity house party. She said Anderson led her behind a tent and repeatedly raped her while she was gagged and choked.

A warrant said the woman was assaulted until she lost consciousness and Anderson left her alone. The warrant said she had vomited on herself and could have choked to death in the backyard.

The judge’s decision Monday is not the first time that Strother has allowed such lenient punishment for sex crimes. Last year, he sentenced a man to deferred probation after he pleaded guilty in the 2013 rape of a former Baylor student. The judge ordered the man to pay for the woman’s counseling. The man told police the woman had been drunk, according to an affidavit.

Strother earlier this year sentenced a man to felony probation for the sexual assault of a former Baylor student, a punishment that came with 30 days in jail. Adrian Andres Ramos, was working toward a degree from Texas Tech University and was allowed to serve the jail time on the weekends. Ramos told authorities he believed the sex with the woman was consensual.

Strother did not return a call from The Associated Press seeking comment on his decision to accept Anderson’s plea deal.

Baylor was engulfed in a sexual assault scandal tied to its football program in 2016, ultimately leading to the departure of several school leaders.