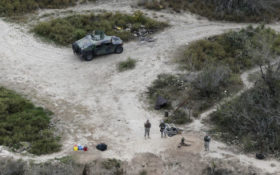 U.S. Border Patrol agents found a 3-year-old boy alone in a field in Texas after likely being abandoned by illegal immigrant smugglers — called coyotes — at the southern border, authorities said.

U.S. Customs and Border Protection said late Tuesday that the boy’s name and a phone number were written on his shoes when agents found him that morning. The agency said it is trying to reach the boy’s family and that the boy “does not speak well enough to communicate.”

NBC News, which first reported the story, said the boy was crying and in distress when the agents found him near Brownsville, which is at the eastern edge of the U.S.-Mexico border in South Texas’ Rio Grande Valley. The child will likely be sent to a facility for unaccompanied minors operated by the U.S. Department of Health and Human Services.

CBP said Wednesday that a Border Patrol agent purchased clothing for the child and that other officers watched movies and played games with him.

The Border Patrol apprehended nearly 9,000 unaccompanied minors just in March and more than 20,000 since January, as border crisis spirals out of control. The agency said Wednesday that it could not provide a breakdown by age.

Many illegals are young children who arrived with an adult relative or, often, with a human smuggler. And adults carrying infants or holding the hands of young children arrive daily, sometimes using false claims of parentage to gain asylum.

That surge of families has put pressure on the Border Patrol, which says it doesn’t have the staff or facilities to care for hundreds of children at a time.

While U.S. authorities have ended the large-scale family separations that spurred outrage last year, the Border Patrol says it still must take children from adults who are not biological parents or legal guardians or when it suspects fraud or neglect. Agency officials said this month that from April 2018 through most of March, the Border Patrol identified more than 3,100 parents and children whom it accused of making “fraudulent claims.”

During a March visit to the Border Patrol’s main processing center in McAllen, reporters saw a 4-year-old boy sitting with adult staff watching cartoons. Authorities said the illegal alien who brought the boy wasn’t his parent and had a criminal record.