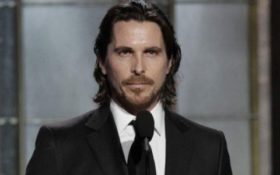 Just how insane has liberal Hollywood become? On Sunday, actor Christian Bale won the Golden Globe for Best Actor in a Musical or Comedy for “Vice” where he played former Vice President Dick Cheney.

And during his intensely political acceptance speech, Bale made sure to thank Satan for the inspiration.

Adam McKay’s Dick Cheney biopic was the most nominated film of the 76th annual Golden Globes, leading the award seasons opening act with six nominations. Bale was the only winner from the picture, and made sure to thank just about everyone for their help… including the Devil.

The film is a highly critical portrait of Cheney as a power-hungry, behind-the-scenes tyrant.

“It’s a movie that’s a lot like the times we live in. There’s part of it that’s absurdist and comedic and then there’s another part of it that’s darkly tragic and dramatic,” McKay told The Associated Press on Thursday.

Was this the first time Satan got a thanks in a Hollywood acceptance speech?

Sunday, the Welsh actor was accepting his award for “Vice” and gave the disturbing and upsetting shout-out. After thanking castmates and director Adam McKay, he told the cheering crowd he was “cornering the market on charisma-free a**holes.””

Bale then extended a “thank you to Satan for giving me inspiration for this role.” He also mused that he might try to play Senate Majority Leader Mitch McConnell next.

If anyone thought he was kidding, look how the official Church of Satan twitter account (yes, it’s a real thing) responded to Bale’s shout-out —

To us, Satan is a symbol of pride, liberty and individualism, and it serves as an external metaphorical projection of our highest personal potential. As Mr. Bale's own talent and skill won him the award, this is fitting. Hail Christian! Hail Satan! https://t.co/ILuK8TFZXi

“He was a wonderful family man — he’s a great dad, he’s an avid reader, he has a brain like a vice and he constantly reads history,” Bale told Fox News last month. ”He was very laid-back. He would have been very happy to be a lineman in Wyoming if he hadn’t met Lynne, who said to him, ‘No, that doesn’t cut it. You need some ambition.’ What would have been if they hadn’t met?”

You can see portions of Bale’s strange speech here —