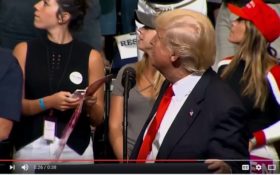 At a rally in Iowa, President Donald Trump took a moment to call on all Americans to give their thoughts and prayers to House Minority Whip Steve Scalise, the Republican congressman who is fighting for his life after an assassination attempt by a radical liberal terrorist.

These “resistance” radicals are so angry and out-of-control, now they don’t even want Americans to be allowed to pray!?

The moment so disgusting and disrespectful, it cuts across political lines. Republican or Democrat, we all pray to an Almighty Creator.

Trying to stop someone from their freedom to worship is an assault on every American’s constitutional rights. Americans right to worship God cannot be infringed upon, and it is guaranteed by the religion clause in the First Amendment (which also protects free speech).

Warning: This video will make you very angry.

With behavior like this, it’s no wonder that Democrats can’t win elections.