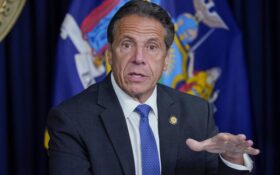 Like a bad case of herpes, former Democratic New York Governor Andrew Cuomo has returned to torture the Empire State — and possibly the whole country — by revving up what looks like a relaunch of his political career.

And you won’t believe his defense: He says he’s the victim of prosecutors, because he’s “politically incorrect”!

Of course, he used TV ads… but the former Clinton Cabinet member is so shameless, he even went to church in order to rise from the political dead.

His comeback attempt began with a new ad that doesn’t come out and say that the 11 women who accused the governor of sexually harassing them, groping their breasts, kissing them, or otherwise pawing them in the governor’s mansion are lying… but it strongly implies it.

The word “perjury” flashes on the screen, although the ad could only find someone making the much less explosive charges that the case’s “legal filings were potentially defective”—and the person who said that is that non-partisan, straight-down-the-middle journalist Rachel Maddow.

The ad brags that five separate district attorneys decided not to prosecute him…which is what Clinton always bragged about, too. That could mean you’re innocent; it could mean you got away Scot-free.

The 30-second spot says it was paid for by the “Friends of Andrew Cuomo,” which is a contradiction in terms. It was put together by Rich Azzopardi, the governor’s longtime servant/employee.

Politics vs. the Law from Rich Azzopardi on Vimeo.

Disgusting as that was—and it was stomach-churning—Cuomo wasn’t content to let his lies filter out through your TV set, fill the stratosphere, and eventually orbit throughout the universe. The old pol wanted to lie in person, to God and man alike, so he went to church.

Cuomo made his first public appearance since his resignation last summer inside the pulpit of God’s Battalion of Prayer Church in Brooklyn.

“I haven’t spoken about it in public yet because I wanted to talk about it here with you because God’s guidance is helping me through,” Cuomo told the Sunday crowd.

To make matters worse, he used the same defense he’d always used—and he’s added a new one: He was canceled, because he’s “politically incorrect.”

“Last February, several women raised issues about my behavior,” he told the congregation. “As I said then, and as I say in this holy hall today, my behavior has been the same for 40 years in public life. You have seen me many, many times, and that has been my behavior.”

“I never sensed that I caused anyone discomfort. I was trying to do the exact opposite,” he said.

Of course, Cuomo didn’t say who he was trying to comfort: his victims or himself. “But I’ve been called old-fashioned, out of touch, and I’ve been told my behavior was not politically correct or appropriate. I accept that.”

He went on to say that his fellow Democrats “used cancel culture to effectively overturn an election.”

Then, he gave the people of God his political pitch: “If you want to cancel something — cancel the federal gridlock, cancel the incompetence, cancel the infighting. Cancel crime, cancel homelessness. Cancel education inequality. Cancel poverty.  Cancel racism. Be outraged, but be outraged at what really matters.”

Be outraged, but be outraged at what really matters pic.twitter.com/eyQ0YuV4dN

“Politically incorrect”—The son of Mario Cuomo? The darling of the media during the COVID-19 scare? The man who made blue-state comedians call themselves “Cuomosexuals”?—he’s the one who got victimized by the media’s “cancel culture” for his “old-fashioned” honesty and refusal to bend to the Woke agenda?

As that other out-of-touch Democrat would say: C’mon, man.

“I’ve apologized many times, and I’ve learned a powerful lesson, and I’ve paid a high price for learning that lesson,” Cuomo went on talking about himself.

Then he said what he had learned: “God isn’t finished with me yet.”

The comeback campaign ignores a few things. First of all, it ignores that he’s still being sued by at least one of his victims. In fact, just about every charge Cuomo claims has been dismissed is still under investigation.

And he had a pretty big oversight: The thousands of elderly people he killed by signing an order forcing nursing homes to admit patients who tested positive for COVID-19. He didn’t care: Old people are the most reliable, and most conservative, voters in any election. Cuomo put ticking time bombs of disease into the nursing homes, waited for them to die, blamed it on President Donald Trump, and figured the whole thing would blow over.

He bet wrong. The families of Cuomo’s victims were having none of it.

“The guy who forced thousands of Covid patients into nursing homes, tried to cover it up, harassed women, got his staff to write a 5 M book and won an Emmy award can’t stand it that he’s not in the spotlight anymore,” tweeted Janice Dean, the Fox News personality who lost two of her elderly in-laws to COVID in New York’s nursing homes. “Thousands families of dead seniors and women he harassed disapprove of this message.”

The guy who forced thousands of Covid patients into nursing homes, tried to cover it up, harassed women, got his staff to write a 5 M book and won an Emmy award can’t stand it that he’s not in the spotlight anymore.

Thousands families of dead seniors and women he harassed disapprove of this message.

Sorry, Andy, your victims aren’t buying it. It’s time to hang it up for good.