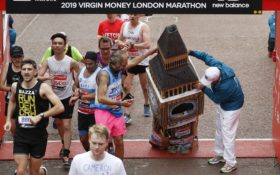 One runner in the 39th London Marathon had a bad time at the end.

Lukas Bates, 30, of the Paddock Wood Athletic Club in Kent, was attempting to break the world record for a runner dressed as a landmark building — in this case the tower that houses Big Ben.

But as he finished, his costume’s peaked roof, which stretched 1.5 meters (nearly five feet) above his head, ran into the overhead scoreboard. After several failed attempts to get under the barrier, a race steward helped him to cross the line Sunday.

Bates’ quest for the record was also stymied. He finished in 3 hours, 54 minutes, 21 seconds, almost 20 minutes slower than the record set by Richard Mietz, who ran the 2018 Berlin Marathon dressed as the Holstentor.