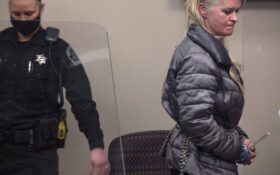 Supporters of a western Michigan restaurant owner rallied again outside her boarded-up business Monday while she awaited release from jail for defying orders related to the coronavirus.

Four Republican lawmakers spoke up for Marlena Pavlos-Hackney while a line of allies stood outside Marlena’s Bistro and Pizzeria on the other side of a busy Holland road.

Instead of government helping entrepreneurs, “one unelected person can tell you you have to shut down,” said state Rep. Steven Johnson of Wayland. “If you don’t, they will throw you in jail.”

State regulators yanked Pavlos-Hackney’s food license in January for serving indoor diners and committing other violations related to preventing the spread of COVID-19. The restaurant, however, stayed open. A judge ultimately ordered her arrest, which was executed during a pre-dawn traffic stop Friday.

Pavlos-Hackney, 55, was declared in contempt of court and returned to jail until she could pay $7,500 and show authorities that the business would remain closed without a food license.

The formal written order, however, listed the amount as $15,000, which her husband paid, attorney Robert Baker said.

A request to release Pavlos-Hackney was pending Monday afternoon, he said.

Supporters boarded up the restaurant doors Friday night and returned Saturday for a rally. A handmade sign on the business said, “Free Marlena Free Michigan!”

Critics are especially upset at Attorney General Dana Nessel, a Democrat, whose office represents state regulators in the matter.

Pavlos-Hackney had countless opportunities to comply with safety rules to prevent the spread of COVID-19, Nessel said.

“She is no martyr and no hero,” Nessel said.