Hillary asks for foreign attack on Trump - The Horn News 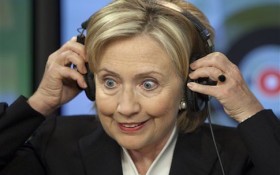 Remember when former Secretary of State Hillary Clinton claimed she was sitting out of the 2020 election?

On Wednesday, sitting across the desk from MSNBC’s Rachel Maddow, Hillary asked a foreign government to interfere in our 2020 presidential election to stop President Donald Trump.

Talking to Maddow, Hillary suggested that China hack the president and help rig the election for the Democrats.

“China, if you’re listening, why don’t you get Trump’s tax returns?” Hillary asked. “I’m sure our media would richly reward you.”

“Imagine, Rachel, that you had one of the Democratic nominees for 2020 on your show, and that person said, you know, the only other adversary of ours who is anywhere near as good as the Russians is China,” she told Maddow. “So why should Russia have all the fun? And since Russia is clearly backing Republicans, why don’t we ask China to back us?”

This kind of statement very much matters — even the Democrats agree.

After all, Trump’s joke regarding Russia and Hillary’s emails during his presidential campaign caused a two-year long investigation that the House Judiciary Committee is still trying to hold hearings on.

More importantly, China has frequently expressed their desire to oust Trump. After all, the U.S. and China have had a very heated relationship under the current administration.

The Trump administration has put the pressure on China ever since Trump took office. It’s caused a prolonged trade battle.

After Trump demanded an investigation into China’s unfair trade practices in 2017, the U.S. placed more than $250 billion in tariffs on imported goods from China.

Now, Hillary is asking Chinese foreign intelligence to back the Democrats to rig the election?

She knows what she’s doing, say critics. As the former Secretary of State, Hillary is no stranger to the ongoing threat China poses to America.

You can watch her segment below:

Imagine if a Democratic 2020 candidate said: "China, if you're listening…"

Just saying that shows the absurdity of the situation we find ourselves in. pic.twitter.com/qyC9fIkHe8