Did a New York Times best-seller from the late 70s predict modern America? - The Horn News 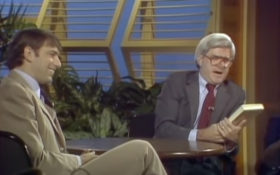 [sponsored] In 1978, a little known investor named Doug Casey released a book with a series of eerily accurate forecasts.

And Doug Casey would become an outspoken and often controversial voice…

He argued with Phil Donahue on live television…

He was invited to speak in front of Congressional leaders by Al Gore… then called global warming “a political scam.”

SEE ALSO: 70s Investing Legend Left Clues About Coming Financial Event (could one group of stocks be on the verge of a huge…)
But he wasn’t contrarian just to get noticed. He put his money where his mouth was and made millions betting against the mainstream…

Casey would go on to invest in over 1,000 companies… traveling the world to visit over 170 countries in the process…

He became a counselor to world governments. His followers have included billionaire CEOs, tech gurus, and world-famous investors.

RELATED: America’s “Most Honest Millionaire” Has Weird Record of Predicting World Events
But the most surprising aspect of his career is how the predictions he made back in Crisis Investing (and subsequent editions) have turned out to be eerily accurate…

“Be wary of banks that are heavily involved in the consumer credit field… Where is this all going to lead? To a wave of bank failures.” – Doug Casey

“the suburbs cater to a social structure that is on its way out, a middle America that no longer exists” – Doug Casey

Today, Doug Casey is more reclusive, splitting his time between Aspen and a mountain retreat in South America (which he equipped with a professional grade golf course and luxury spa).

Yet, he has not lost his strange talent for accurately predicting world eventswell before they happen.

Recently Doug sat down for a rare talk about modern America…

…to a new prediction that could affect your money, your lifestyle, and this country in ways few could have guessed…