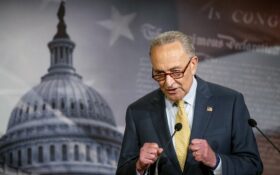 Top Democratic leaders in the Senate say the Republican policing bill is “not salvageable,” as they signal an intent to block it and demand negotiations on a new, more bipartisan package in response to the killing of Black Americans.

That’s according to a letter to Senate Majority Leader Mitch McConnell from the Democrats obtained by The Associated Press.

“This bill is not salvageable and we need bipartisan talks to get to a constructive starting point,” write Democratic leader Chuck Schumer and the co-authors of the party’s bill, Sen. Kamala Harris, D-Calif., and Sen. Cory Booker, D-N.J.

The Republican legislation would create a national database of police use-of-force incidents, restrict police chokeholds and set up new training procedures. It is not as sweeping as a Democratic proposal, but has similar provisions.

The opposition from Democrats is being backed by the nation’s leading civil rights organizations and the lawyer, Benjamin Crump, representing the families of George Floyd and Breonna Taylor, two African Americans whose deaths in police interactions sparked worldwide protest over law enforcement procedures.

McConnell is pushing ahead with the Justice Act in a test vote Wednesday, but without Democratic backing the bill is not expected to reach the 60-vote threshold needed to advance.

Congress is under enormous pressure to establish new oversight and accountability of the police as demonstrations spill into cities large and small nationwide.