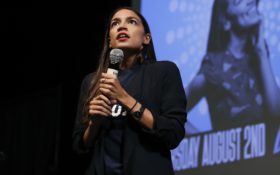 Elizabeth Warren, D-M.A. appears poised to get a boost from perhaps the most influential — and controversial — millennial lawmaker of all time.

But what may be even more important is that Ocasio-Cortez is snubbing the man who gave her her political start: Bernie Sanders, I-V.T., who she worked for on his 2016 political campaign.

It’s even more potentially complicated. Just earlier this year Warren told MSNBC, “I believe in markets. I see the benefits that markets can produce.”

Ocasio-Cortez  voters could end up abandoning her for taking up with a capitalist — many of her voters likely supported her because they were expecting her to fight for socialism. Not only would the rejection of Bernie be a spit in his face, but it could also be a spit in the face of what’s left of her supporters.

Could Ocasio-Cortez have finally reached the end of her rope?

Numbers suggest that it makes sense to get behind Warren’s campaign as opposed to Sanders’, who has seen his support largely dry up in recent weeks. The latest Quinnipiac poll showed Warren placing second behind only Joe Biden. After some dismal numbers, she’s now bursting the Bernie mania that once took voters by storm.

Earlier this month Warren received some support from Ocasio-Cortez, who endorsed her call to break up big tech companies.

The two even talk the hit-television show “Game of Thrones” together.

It’s been over 24 hours. No more spoiler alerts. Here’s why @AOC and I are officially on #TeamSansa now. pic.twitter.com/WKKHDbFz1M

Signs point to them forming a political alliance.

With an Ocasio-Cortez endorsement for Warren, Sanders is likely to be trumped without ever even getting to face Trump.