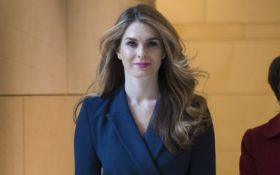 The closed-door interview with Hope Hicks, a former communications director for President Donald Trump, marks the first time House Democrats are hearing from someone linked to the White House inner circle since the release of special counsel Robert Mueller’s report.

The House Judiciary Committee originally subpoenaed Hicks to give public testimony, but agreed to the private interview after negotiations. A transcript of the session will be released in the days afterward. It is unclear how much new information, if any, Hicks will provide.

She already cooperated extensively with Mueller’s probe. A White House lawyer who will be in the room for the interview is expected to try and protect her from unfair, politically-charged questions.

White House counsel Pat Cipollone said Hicks, as one of Trump’s former senior advisers, is “absolutely immune” from compelled testimony with respect to her service to the president because of the separation of powers between the executive and legislative branches.

The White House has similarly cited executive privilege with respect to many of the Democrats’ demands, using the president’s power to withhold information to protect the confidentiality of the Oval Office decision-making process.

Democrats disagree that Hicks’ answers are covered by such immunity or privilege.

The committee has also subpoenaed Hicks for documents, but she has only partially complied. She agreed to provide some information from her work on Trump’s campaign, according to the committee, but none from her time at the White House.

Testimony from witnesses such as Hicks is step-one in House Speaker Nancy Pelosi’s post-Mueller attack on Trump.

More than 60 lawmakers in her caucus — including almost a dozen on the Judiciary Committee — have called for opening an impeachment inquiry, but she has said she wants committees to investigate first and come to a decision on impeachment later.

While Trump has continued to block their requests, Democrats have made some minor gains in recent weeks with Hicks’ appearance and the Justice Department’s agreeing to make some underlying information from Mueller’s report available to committee members.

Hicks was present for many of the key moments reviewed in the Mueller report, and her name is one of the most frequently mentioned in the document.

Mueller wrote in his 448-page report released in April that there was no evidence to establish a criminal conspiracy between Trump’s 2016 campaign and Russia. Unsatisfied with that answer, Democrats are demanding more information.

Democratic aides said they plan on asking Hicks about several of those episodes, including the firing of FBI Director James Comey. The aides spoke on condition of anonymity to discuss their plans for the closed-door meeting.

The Democrats plan to use some of Hicks’ answers to those questions to inform a committee hearing to review Mueller’s report on Thursday. It’s the second in a series of hearings in which the committee is talking to expert witnesses about the report. The transcript will then be released, possibly as soon as this week, according to the aides.

Other Trump associates frequently mentioned in Mueller’s report have refused to appear before the committee, including former White House Counsel Donald McGahn. McGahn’s former chief of staff, Annie Donaldson, was also subpoenaed for documents and an interview and has declined to provide the documents, like Hicks and McGahn. It is unclear whether Donaldson will show up for a scheduled deposition next week.

Republicans have strongly criticized the investigations and say they are unnecessary after Mueller spent two years reviewing the same material and talking to the same witnesses.

Georgia Rep. Doug Collins, top Republican on the committee, said Hicks’ appearance proves that Trump is not stonewalling Congress. And he said they could have probably heard from her sooner if they hadn’t taken “a scorched-earth approach to pursuing information” with subpoenas.