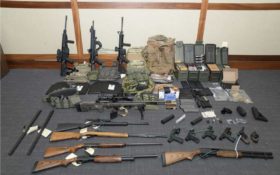 A Coast Guard officer who espoused white supremacist views, dreamed of mass murder and stockpiled weapons in his basement apartment drew up what appeared to be a computer-spreadsheet hit list of politicians and TV journalists, federal authorities say.

“The defendant is a domestic terrorist, bent on committing acts dangerous to human life that are intended to affect governmental conduct,” they wrote.

Hasson, 49, was arrested last week. Investigators gave no immediate details on how or when he came to their attention.

Federal agents found 15 guns, including several rifles, and over 1,000 rounds of ammunition inside his apartment in Silver Spring, Maryland.

Prosecutors wrote that Hasson had begun the “process of targeting specific victims.” Last February, he searched the internet for the “most liberal senators” and also asked, “Do senators have ss (Secret Service) protection” and “Are supreme court justices protected,” according to the court filing.

The federal public defender’s office, which is representing Hasson, had no comment on the allegations, and no one answered the door Wednesday at the home address for Hasson listed in public records.

Court papers detail a June 2017 draft email in which he wrote that he was “dreaming of a way to kill almost every last person on the earth” and pondering how to acquire anthrax and toxins to create botulism or a deadly influenza.

In the same email, he discussed “biological attacks followed by attack on food supply” as well as a bombing and sniper attacks.

Also, Hasson sent himself a draft letter in 2017 that he had written to a neo-Nazi leader and “identified himself as a White Nationalist for over 30 years and advocated for ‘focused violence’ in order to establish a white homeland,” prosecutors wrote.

In their search, federal agents found a container with more than 30 bottles labeled human growth hormone, court papers said. Hasson appeared to be a chronic user of the opioid painkiller Tramadol, authorities said.

Bob Davis, who rents a house Hasson owns in coastal Currituck County, North Carolina, and met him a few times, said he was “absolutely shocked” by the allegations.

“He was a very stern military guy. That’s how I saw him. I truly nothing but respected him. There are people in life who are not 100 percenters. He was a 100 percenter,” Davis said, meaning Hasson worked hard and didn’t slack off. “He portrayed in a very professional manner. He was honorable. … He was a good man.”