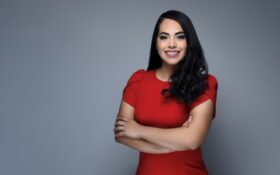 “Representative Mayra Flores became the first Republican to represent the Rio Grande Valley in more than a century after she won a special election last month and flipped the congressional seat from blue to red. She also became the first Latina Republican ever sent by Texas to Congress. Her abbreviated term lasts only through the end of the year, and she is seen as a long shot to win re-election to a full one,” The New York Times’ Jennifer Medina wrote Wednesday.

But what made Flores’ victory so unexpected is her embrace of “America First” and total rejection of the Democratic Party, which she calls the “greatest threat America faces.”

Flores credited her father and family’s legal immigration into the United States when she was sworn in on June 22.

“We want to be heard, and we are tired of being taken for granted as second-class citizens,” Flores said. “My father Saul Flores moved us to the United States because of the promise of America. He told us that, in this country, if you work hard, you can accomplish anything.”

“My story proves that he is right,” she said.

“I came to this country legally, and as did so many in South Texas, for the chance to live the American dream,” Flores said. “My legal immigration experience as a child was incredible. That legal process is how it should be done, and I want more children to have that same positive experience.”

Republican Party leadership has flocked to embrace Flores and her history-making story.

“It’s an exciting time to see Mayra Flores make history as the first woman born in Mexico to become a member of Congress, and she’s got a great story and she’s really the epitome of the American dream,” House Minority Whip Steve Scalise, R-La., said after Flores was sworn in. “We’re going to continue to encourage a more diverse field of candidates.”

South Texas generally has been considered a politically liberal area in red Texas, and the growth in the area has long been eyed by Democratic Party leaders as their chance to flip control of the state.

But Latino and Latina voters in the area are culturally conservative, Medina wrote Wednesday — and the far-left shift of national Democrats have led to a rise of conservative leaders in the community.

“Church pews are packed on Sundays, American flags wave from their poles on front lawns and law enforcement is revered. Flores’ husband is a Border Patrol agent, a note she often emphasized on the campaign trail,” Medina wrote.

“This was a profound message to the party,” Rep. Vicente Gonzalez, D-Texas, warned the Times. “It’s really woken up the Democratic base. I’ve never had so many people volunteer for free in all my years.”