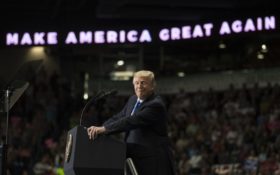 In 2016 President Donald Trump won the state of Ohio by 8 points — and Democrats have largely given up on flipping the state back in 2020.

The Buckeye state, which had numerous counties that voted for both former presidents Barack Obama and Bill Clinton, is now Trump country.

Chris Gagin says he hasn’t changed much politically, even as so much around him has — and he’s going to back Trump again.

The attorney from rural Belmont County, Ohio, became a Republican in 2013 after Democrats embraced environmental policies that he believed were detrimental to the area’s coal mining and fracking industries. As an pro-life, pro-gun conservative, he felt unwelcome.

“Conservative Democrats have become all but extinct,” said Gagin, who served for a time as county Republican chairman. He’s among many former Democrats in blue-collar Ohio who voted for Donald Trump in 2016 and for an all-GOP statewide ticket last year.

As Democrats bring their next primary debate to Ohio on Tuesday, they’re grappling with whether the new Republican dominance in those industrial and rural pockets has pushed Ohio out of their reach.

Some Democratic presidential campaigns are contemplating once unheard-of White House victory scenarios that leave out Ohio. The storied swing state — a place that sided with the winning presidential candidate in all but one election since 1944 — seems likely to be eclipsed by Wisconsin, Michigan and Pennsylvania in next year’s election.

“Ohio isn’t at the center of the political universe as it used to be,” said Kyle Kondik, an elections analyst at the University of Virginia Center for Politics.

At this same time during the last presidential campaign, in October 2015, presidential campaigning in Ohio was so vigorous there were fears it was drowning out that year’s elections. A group concerned about one of that year’s ballot issues, the American Policy Roundtable, even bought an online ad reminding voters the presidential election was still a year away. The run-up to the 2020 election has been quieter, with Ohio seeing only a handful of notable campaign events since spring.

Democratic presidential candidates will debate Tuesday in Westerville, a suburb outside Columbus replete with the college-educated women and young voters who Democrats see as representing the party’s best prospects of an Ohio comeback, along with minorities.

“I think it’s totally winnable,” said Democratic political consultant Aaron Pickrell, an Ohio campaign director and adviser to Obama’s successful 2008 and 2012 campaigns. Any victory will depend on finding the right balance of supporters in urban, suburban, rural and former industrial communities, he said.

Ohio was long a bellwether because its population resembled that of the United States as a whole. It hasn’t picked a losing presidential candidate since voting for Richard Nixon in 1960. But the state no longer mirrors the nation.

It’s whiter and slightly older than the national average. Just 29% of Ohio residents have a college degree, compared with the national average of nearly 32.6%. That education gap has translated into lower earnings. The state’s median household income is $56,111, nearly $6,000 below the national median.

Republicans run stronger with those groups. The GOP tilt is even more pronounced in places like Belmont County, which sits on the state line with Pennsylvania and West Virginia.

Gagin said voters there are looking for politicians who channel their frustration. Trump took more than two-thirds of the county’s vote in 2016. In 2008, Republican John McCain lost narrowly to Obama.

“Not to get racial about it, but lots of white folks feel others are either getting ahead or getting a handout, while they’re just having to go to work every day and just falling further and further behind,” Gagin said. “That’s how you get to the politics of aggrievement.”

Mandi Merritt, a spokeswoman for the Republican National Committee, said the party is not taking Ohio for granted. She said the GOP is prepared to hit Democrats for “radical” ideas like universal health care and the Green New Deal. They are too expensive and impractical for Midwestern voters, she said.

“It’s a race to the left, and it’s not going to resonate with everyday Ohioans,” she said.

She said impeachment proceedings in Washington are energizing, not alienating, Trump’s base.