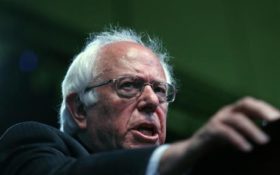 Sen. Bernie Sanders, I-V.T., and his presidential campaign are being sabatoged by Hillary Clinton and her pals.

It’s 2016 all over again — and critics are calling it an act of petty revenge.

The New York Times reported that Sanders’ campaign is under attack by centrist Democrats, big money donors, and establishment figures. Behind the scenes, these Democratic power brokers are  conspiring stop Sanders from getting the 2020 Democratic candidacy — just like they did during the 2016 Democratic primary.

Simply put, The Times suggests that middle of the road Democrats are scared of Sanders — and want him gone. A recent Emerson poll has him at the top of the primary, ahead of former Vice President Joe Biden.

“How, some Democrats are beginning to ask, do they thwart a 70-something candidate from outside the party structure who is immune to intimidation or incentive and wields support from an unwavering base, without simply reinforcing his ‘the establishment is out to get me’ message!” writes The Times.

Democrats aren’t just spooked. Political allies of the Clintons are also bitter and want their revenge on Sanders.

In 2016, Sanders supporters complained that Hillary, Democratic superdelegates, and liberal fat cat donors stole the primary from the Vermont socialist. Hillary, for example, had the majority of the superdelegates — party loyalsts — already in her pockets before the 2016 primaries even started. And the Democratic Party set-up the process to count these superdelegate votes more than the average citizen.

This time around, Hillary is on the outside — but her presence is still being felt. According to insiders, Hillary’s closest political allies are organizing these secret never-Bernie meetings, like former Virginia Governor Terry McAuliffe and “liberal hitman,” Hillary apologist David Brock.

“There’s a growing realization that Sanders could end up winning this thing, or certainly that he stays in so long that he damages the actual winner,” Brock said. “The Bernie question comes up in every fundraising meeting I do.”

And Brock wants to keep the meetings secret to keep Bernie from capitalizing in the mainstream media.

“You can see him reading the headlines now: Rich people don’t like me,” Brock said.

The widespread hysteria among Democrats is causing concern that, by the time the Democratic National Convention rolls around, not a single candidate will have secured the nomination.

“Unlike Republicans, who used a winner-take-all primary format, Democrats use a proportional system, so candidates only need to garner 15 percent of the vote in a primary or caucus to pick up delegates,” the Times reports. “And even if a candidate fails to capture 15 percent statewide, he or she could still win delegates by meeting that vote threshold in individual congressional districts.”

Should Bernie divide the primaries even further, the superdelegates and inside donors would look to do the same exact thing all over again.

So Hillary and her pals are going to try and unfairly take out “Crazy Bernie Sanders” — again.