2018 midterm: Everything you need to know - The Horn News 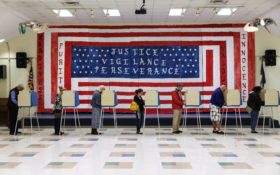 Democrats seized the House majority from the Republican Party on Tuesday, but the GOP gained ground in the Senate and preserved key governorships, beating back House Minority Speaker Nancy Pelosi’s “blue wave” that never actually happened.

But the Democrats’ edge in the House is very narrow. With 218 seats needed for a majority, Democrats have won 219 and the Republicans 193, with winners undetermined in 23 races.

The election results revealed that the president’s party will maintain control of the Senate.

It could have been a much bigger night for Democrats, who suffered stinging losses in Ohio and in Florida, where Trump-backed Republican Ron DeSantis ended Democrat Andrew Gillum’s bid to become the state’s first African-American governor.

The 2018 elections also exposed an extraordinary political realignment in an electorate defined by race, gender, and education that could shape U.S. politics for years to come.

Women won at least 85 seats in the House, a record. The House was also getting its first two Muslim women, Massachusetts elected its first black congresswoman, and Tennessee got its first female senator.

Three candidates had hoped to become their states’ first African-American governors, although just one — Georgia Democrat Stacey Abrams — has refused to concede.

Some hurt worse than others.

In Texas, Sen Ted Cruz staved off a tough challenge from Democrat Beto O’Rourke, whose record-smashing out-of-state fundraising and liberal celebrity endorsements have set off buzz he could be a credible 2020 White House contender.

Trump, who encouraged voters to view the 2018 midterms as a referendum on his leadership, took to Twitter on Tuesday night to congratulate all of the candidates on their successes.

Tremendous success tonight. Thank you to all!

Trump is expected to address the results at a post-election news conference scheduled for midday Wednesday.