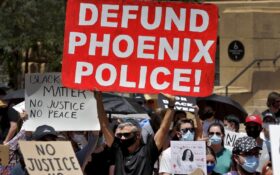 President Donald Trump is back on the offensive. He and his allies have pounced on far-left calls to “defund the police” as he looks to regain momentum after ugly weeks in American history.

The Trump charge is forcing key Democrats to address the suddenly-popular call as liberals scramble to define the demand.

Some say they’d like to see a partial defunding of police forces across the country.

Others want to abolish police entirely.

Critics say the crisscrossing of messages from the Democratic side is flooding the airwaves, making it nearly impossible for voters to get a single read on the issue.

Many Democratic leaders are playing it safe — but the method could prove dangerous.

Far-left liberals are screaming for the police to be abolished. If Democrats in Washington, D.C. don’t play along, the election booths could look awfully empty come November.

So far Democratic presidential nominee Joe Biden is distancing himself from the “defund” push.

Facing increasing pressure to weigh in, Biden addressed the issue Monday in an interview with “CBS Evening News.”

“I don’t support defunding the police. I support conditioning federal aid to police based on whether or not they meet certain basic standards of decency, honorableness, and, in fact, are able to demonstrate they can protect the community, everybody in the community,” Biden said.

Other opponents of the movement include Sen. Cory Booker, D-N.J., a former presidential candidate and one of two black Democratic senators, and Rep. Karen Bass, D-Calif., head of the Congressional Black Caucus.

NAACP President Derrick Johnson, in an interview, also declined to endorse calls to defund the police.

“I support the energy behind it. I don’t know what that substantively means. As I’m talking to people about the concept, I’ve gotten three different explanations,” said Johnson, who has criticized Trump. “We know there has to be a change in the culture of policing in this country.”

Democrats were previously well-positioned to win over the political center this fall, according to Republican pollster Frank Luntz, who said the sweeping social unrest are “killing” Trump’s poll standings.

Luntz added, however, that Democrats risk their advantage by embracing policies viewed as radical following the death of George Floyd in Minneapolis. The handcuffed black man died after a white officer pressed his knee into Floyd’s neck for more than eight minutes.

Municipal officials in Minneapolis have endorsed the “defund the police” language backed by some civil rights activists and a handful of progressive House Democrats. Protesters over the weekend also painted “DEFUND THE POLICE” in large yellow letters on a street close to the White House.

But there was little evidence that the effort was gaining momentum in Congress. Some Democrats described it as bad politics, even if most Democrats shared the desire to overhaul policing.

Former Sen. Heidi Heitkamp, D-N.D., a white moderate who lost her 2018 reelection bid, said “defund the police” is “a horrible name” that misconstrues the goal.

“By starting with the word ‘defund,’ you’ve left the impression that you are doing something much more radical than what needs to be done,” said Heitkamp, a leader of the One Country Project, which is trying to help Democrats connect better with rural voters.

She said the term left her frustrated that “there’s going to be somebody who’s going to try to find an opportunity in this, especially among the Republican Party, and use it now as an excuse not to address what is a very real problem in America.”

That’s largely what played out as the Trump campaign and congressional Republicans sought to link Democrats to the defund effort.

“This year has seen the lowest crime numbers in our Country’s recorded history, and now the Radical Left Democrats want to Defund and Abandon our Police,” Trump declared on social media. “Sorry, I want LAW & ORDER!”

The House GOP campaign arm sent out emails condemning “defund the police” and connecting it to Democratic candidates.

“No industry is safe from Democrats’ abolish culture,” said Michael McAdams, a spokesman for the National Republican Congressional Committee. “First they wanted to abolish private health insurance, then it was capitalism and now it’s the police. What’s next, the fire department?”

Democrats on Capitol Hill unveiled a sweeping proposal Monday to address police brutality that did not include plans to strip funding from the police. The Justice in Policing Act would limit legal protections for police, create a national database of excessive-force incidents and ban chokeholds, among other changes.

Rep. Greg Meeks, a member of the Congressional Black Caucus and a group of moderate House Democrats called the New Democrat Coalition, said Trump’s tweets accusing Democrats of seeking to abolish the police are a diversion.

Democratic Rep. Matt Cartwright, who is white and represents a Trump-leaning district in northeastern Pennsylvania, rejected calls to defund the police outright.

“I don’t care how it’s named, I’m not for that,” he said, while noting he’s joined protest marches in his district.

Asked if GOP use of the term “defund the police” might erode his support, Cartwright said, “If they can get voters to believe that lie about me, I suppose. Am I afraid of it? No.”

Trump, meanwhile, is grasping for a strategy that might generate some momentum. A NBC News/Wall Street Journal poll this weekend found that 80% of Americans believe the country is out of control.

Some Trump advisers have considered having the president deliver an address on police-community relations and racial injustice, while others believe it would do little good, according to two White House officials and Republicans close to the White House. They also discussed creating a task force featuring Housing Secretary Ben Carson, the only black member of Trump’s Cabinet, but that has yet to get off the ground.

The people spoke on condition of anonymity to discuss private conversations.

Before the pandemic, Trump advisers believed the president had a real chance of making inroads with black voters, given his support for criminal justice reform and the strength of the economy.