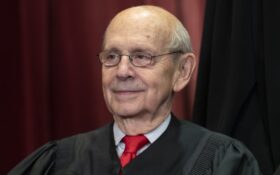 Meanwhile, Rep. Jim Cooper, D-Tenn., has also announced retirement in a statement, leaving his heavily Democratic district to choose someone else in a primary election later this year — the 29th Democratic congressmember to quit in the past year.

Breyer was nominated to the court by former President Bill Clinton, at the request of the late Sen. Ted Kennedy, D-Mass.

Breyer usually voted in lockstep with the other Democrat-appointed justices. However, he displayed some tics that set him apart.

For one thing, Breyer showed more familiarity with administrative law than constitutional law. He gained a reputation as a pragmatist.

However, as a career bureaucrat, Breyer was also criticized for his overly complicated interpretations of the law.

He was ridiculed for apparently contradicting himself.

Breyer has not yet specified the date of his retirement. The Times expects Biden to announce the details publicly on Friday.

President Joe Biden vowed during a debate to nominate a Black woman to the Supreme Court. Some conservatives have worried that Biden will nominate another highly partisan Democrat, like Vice President Kamala Harris.

That’s not the only thing that conservatives are worried about. Jim Cooper has announced retirement after a long record of bipartisan cooperation, and there’s no telling who might replace him.

Cooper remains a card-carrying member of the Blue Dog Coalition, a shrinking caucus of “fiscally conservative” Democrats. For his part, Cooper ended 2013 as the only House Democrat to vote against spending after Hurricane Sandy.

However, Cooper also represents a safe Democratic seat. Since 2012, he’s won every election by more than 25 points. He even ran unopposed in 2020, minus the 14 votes for write-in candidates. He cited redistricting as the reason for his retirement.

Knowing the tilt of his district, the Democratic electorate may replace him with a far-left progressive, as it has done in other heavily Democratic districts.

In short, the Democrats are preparing to pounce on the two glaring vacancies left by these giants.