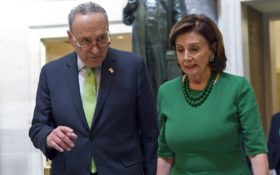 Democrats have a serious problem on their hands in this November’s midterm elections: In order to save their job, they have to say that they’re doing great. Everything — from inflation, to immigration, to keeping kids masked in public — says that’s not going to work.

But Democrats think they’ve found the perfect distraction—and their reelection strategy is just another example of how bad they are at decision-making and critical thinking.

On issues Americans really care about, the Biden administration plans to give voters the middle finger. Take illegal immigration, for example.

The Biden administration has thrown the U.S. border wide open, with the largest number of illegal aliens in American history entering the country on its watch.

Now, it’s set to repeal the one policy that was working to keep illegal aliens out of the country. A policy called Title 42, which went into effect at the beginning of COVID, let Border Patrol agents deport illegal immigrants out of the country to prevent the spread of the virus. Agents used the policy 1.7 million times.

It’s working, so the Democrats decided to kill it.

Biden announced that he would lift Title 42 on May 23. That will cause the number of illegal immigrants entering the U.S. each day to almost triple, to 18,000 every single day.

Democrats are worried sick that this could be a disaster—for their reelection. They’re getting killed on the issue. It’s so serious that Biden’s closest ally in the Senate, Chris Coons, D-Del., broke ranks with the president. He told “Face the Nation” recently, “My hope is that that will be reconsidered appropriately.”

Democratic senators facing the toughest election battles—in Arizona, New Hampshire, and Nevada—have suddenly discovered the fact that the border is wide open and said they want to

But they don’t really want to fix anything.

Republicans are trying to introduce a bill to prevent Biden “from ceasing or lessening implementation of, the COVID-19 border health provisions through the end of the COVID-19 pandemic”—but Chuck Schumer and Nancy Pelosi have it blocked.

If senators up for reelection really cared, they could demand their leaders let his measure come up for a vote…but their big talk is confined to ads for the voters back home.

A Democratic senator aide let the cat out of the bag: The Hill reports interviewing a “senior Senate Democratic aide” who “said the easiest solution would be to delay lifting the order until the fall or after the election.”

So, pretend like you care about border security until after the voters have spoken—and then you can screw them.

And unlike most of the things Congress obsesses over, the voters care about immigration. Voters top issues right now are inflation (32%), the economy (27%), and immigration (21%), according to a new Harvard CAPS/Harris poll.

Biden and Harris have made life in America so miserable that the only thing that concerns Americans more than the border is their own economic well-being.

With these issues going against them this fall, what do Democrats plan to run on in 2022?

Even after the strategy backfired in the Virginia governor’s race last fall, Democrats think saying, “Orange Man Bad” is a campaign winner in 2022. And they think the leaked text messages of the January 6th Commission will be so scintillating that you won’t have a choice but to vote for a Democrat.

“I don’t think you can look at that race and decide tying candidates to the outrageous positions of Donald Trump doesn’t work,” said one Democratic consultant, who is paid to come up with winning strategies.

But most Americans aren’t deranged anti-Trumpers. They might not have liked all his tweets and his personal life, but they liked economic prosperity, border security, and gasoline at $2 per gallon.

They liked having a president who arrested rioters, instead of bailing them out.

And deep down, the Democrats know it.

So, what’s this really all about? It’s about their economic well-being.

The head of the group trying to reelect Democrats to the House this fall — Rep. Sean Patrick Maloney, D-N.Y. — sent out a fundraising email on Thursday that started off, “Trump hinted he’ll run for President if Republicans retake the House.”

They’re willing to run on the most inconsequential issues in order to fill their pockets, even if it means they lose the midterm elections (which they will).

What you care about couldn’t concern them any less—about immigration or any other issue.