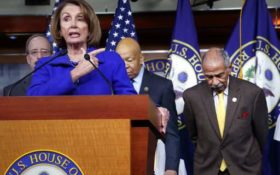 After Democrats retook the House in November’s critical mid-term elections, the mainstream media boasted that the left was going to win back total control in 2020.

But there’s one thing the liberal media didn’t account for: It’ll be OVER for democratic hopeful long before the polls open up.

Because liberals are afraid to admit they can’t get out of their own way. The months following the House swing have proven the left is hopelessly immature and fractured — which is likely to decimate Democrat’s 2020 hopes.

The phrase “act like you’ve been here before,” needs repeating here.

The focus of liberal lawmakers has already become endlessly confused, off-topic, and all lacking coordination in Congress’ current session.

Ahead of the big political fight they face in the coming months, the mistakes are going to continue to build.

Rep. Alexandria Ocasio-Cortez (D-NY), for example, has been continuously attacked by her own party for being so radical — and she’s getting punchy about it.

Recently on “The Late Show with Stephen Colbert,” Ocasio-Cortez said she didn’t care about Democrats national agenda and, using colorful words, that people in her own party don’t matter.

She even went as far as embracing divisiveness, an accusation liberals often level at President Donald Trump.

It’s almost as if the left isn’t even aware of its own hypocrisy. How cute.

Ocasio-Cortez is convinced that her whims should be the moral compass for politics. Critics say that’s a recipe for shortsightedness and mistakes.

A recent poll by the AP-NORC Center canvassed U.S. citizens, asking them what their concerns of the nation were. The top three answers were classics: The economy, health care, and immigration, respectively.

Not a mention of radical social justice or the agenda of the alt-left. So not only are the Democrats in disarray… they’re entirely out of touch with voters.

Meanwhile, Rep. Tulsi Gabbard, perhaps in the most bewildering move of them, all has said publicly that the Democrats deserve blame for the government shutdown.

At South Carolina’s Martin Luther King Jr. Day rally, Sens. Corey Booker and Bernie Sanders went to Columbia, which many experts speculate was to get a sample of the first southern state to primary in 2020.

Observers said the speeches at the rally were a mess, and the two senators came up with two entirely different messages.

Bernie called Trump a racist (again). But Booker called for a unity in solving the nation’s issues.

If the liberals intend to get anywhere, they should worry less about Trump and the GOP and more about themselves.

They need a message.

And they’re running out of time.