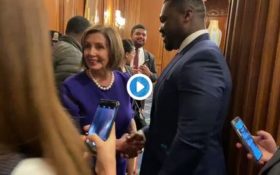 With the expected impeachment of President Donald Trump on the agenda, it would seem that Democrats would at the very least focus on the task at hand.

They’ve claimed repeatedly that the situation is urgent – and called it a constitutional crisis.

But their actions speak a whole lot louder than words.

One day ahead of a vote on how the impeachment proceedings will proceed – when they should’ve been carefully studying the language of the bill and the solemn process that’s about to unfold – they were doing something else entirely.

They were practically climbing over each other for a chance to have a photo opportunity with rapper and actor 50 Cent, aka Curtis Jackson, who stars in and is executive producer of the cable show “Power.”

Even House Speaker Nancy Pelosi posed with the star, who at the age of 19 pleaded guilty to felony charges of selling heroin and crack:

MEANWHILE: @50cent and @SpeakerPelosi taking a photo as the Capitol pic.twitter.com/AbmhSvi71w

Rep. Bobby Rush, D-Ill., not only met with the rapper, but showed him off to reporters like a trophy – then publicly buttered up his new celebrity friend.

“Why didn’t ‘Power’ get an Emmy?” Rush asked as he introduced Jackson to an ABC News reporter. “Why wasn’t they even in the room? Why wasn’t they really even considered for an Emmy?”

Rush said it “smacks of discrimination,” according to ABC News.

Maybe Congress will investigate that next.

Hate it or love it, shows like #Power matter b/c #RepresentationMatters. It is important that we see people who look like us in government AND on the big screen.

Thank you @50Cent, @naturinaughton, & @STARZ for coming to speak w/ me about the importance of diverse programming. pic.twitter.com/hB4DO3nuI9

Rep. Tony Cárdenas (D-Calif.) also lined up for a photo:

Sat down with @50cent and @naturinaughton today to discuss diversity and representation in the entertainment industry. As a fan of @Power_STARZ, I was shocked to find out that….. pic.twitter.com/4cZNOjqfDv

Jackson wasn’t just in town to pose for photos.

He was, like everyone else in D.C., there with an agenda – one that matters to him financially.

While he was ostensibly there to talk up the importance of diversity and inclusion in TV, The Hill reports he was also looking for some Congressional help keeping his show on the air.

Starz, the cable network that carries “Power,” is currently locked in a dispute with the Comcast cable provider, which is dropping the various Starz channels from its Xfinity bundling package and replacing it with Epix.

That means consumers who wish to keep watching the 17 channels in the Starz network  – and 50 Cent’s “Power” – will have to shell out an extra $12.

In short, it’s yet one more chapter in the on-again, off-again money disputes between cable providers and TV networks.

Comcast claims the streaming options offered by Starz to non-cable subscribers make its channels less valuable – and they don’t want to use subscribers’ fees to keep paying the network for stuff that’s available via Amazon and such.

Some regulators believe this runs afoul of antitrust rules – and Starz could be hoping for government intervention as a result.

It might be their only option at this point: Jackson has been hurtling insults at Comcast on social media, using a few words that can’t be reprinted here to describe CEO Brian L. Roberts.

But since profanity and insults haven’t moved the needle in negotiations, he seems to be trying to help Starz by taking the case to Congress.

A Starz executive popping up on Capitol Hill might not get the time of day.

But a multi-platinum Grammy-winning hip-hop icon and a TV star/producer? Clearly, that’s how you get the attention of the Hollywood-loving liberals now running the House.

Comcast argues that Starz doesn’t have a case no matter who’s making it.

“Program carriage issues have never provided a basis for plausible antitrust concerns,” a Comcast rep told The New York Post. “Today, with the current state of the market where programmers have so many options, it is hard to see any viable antitrust claim against a distributor.”

Maybe not based on the “current state of the market.”

But the market may not be able to compete with star-struck Democratic lawmakers.