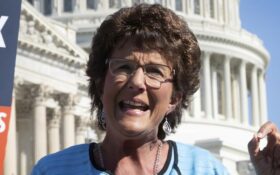 Democrat Paul Steury has been confirmed as the party’s candidate for the special election to complete the congressional term of Republican U.S. Rep. Jackie Walorski following her death in a northern Indiana highway crash.

Steury is a high school science teacher from Goshen and will face Republican Rudy Yakym and Libertarian William Henry.

Yakym won a Republican caucus on Saturday to replace Walorski on the November ballot after gaining the endorsement of Walorski’s husband. Yakym, an executive with Elkhart distribution company Kem Krest, will be a heavy favorite to win in the solidly Republican district.

All three candidates are running both in the special election to complete Walorski’s term that ends in early January and the regular election for a full two-year term. Both elections will be on the November ballot.

Walorski, who was 58, and two of her office staffers were killed Aug. 3. when their SUV crossed the centerline of a state highway for unknown reasons and crashed into an oncoming vehicle. The woman driving the other vehicle also died.