Dems furious at Kamala Harris over 4 words... - The Horn News 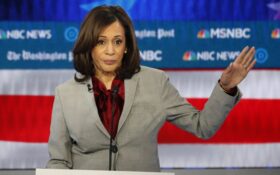 Vice President Kamala Harris is one of the most unpopular elected officials in modern American history.

According to a December poll by Rassmussen Reports, Harris has only a 39 percent approval rating.

That grew worse after a simple four-word message from the vice president angered both Republicans and Democrats.

Harris told her followers, “Let’s get to work.”

A new year to continue building a better America.

Let’s get to work. pic.twitter.com/Zqb2yJ0J0y

Angered Republicans and conservatives on social media demanded that Harris, who has failed to manage an escalating humanitarian crisis at the U.S. Southern border, get to work herself.

“Get to work? What have you been doing this entire time?” asked one social media user.

“’Let’s get to work’ bro it’s been a year what have y’all been doing,” another replied.

But that paled in comparison to the fury from liberal social media users.

Democrats were far more angered that the administration would ask people to “get to work” — and instead of a job, they demanded more government stimulus checks and for their debts to be paid by taxpayers.

One user demanded $2,000 monthly government payments to all Americans for the duration of the coronavirus pandemic. He wasn’t alone. “Monthly stimulus checks IS infrastructure” another liberal user replied.

“Since everyone wants student loans to go away, how about I get free plumbing school too,” he asked.

But all of that wasn’t enough for one man. He said the government should provide monthly checks, pay off student loans, and eliminate all credit card debt.

But Harris has at least succeeded in doing something the Biden administration has been unable to do.

She has finally united America… against her.