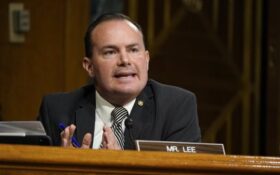 The second day of the impeachment trial of former President Donald Trump reportedly “ended in chaos” after House Democrats were forced to withdraw from the record a key piece in their case.

Lee, however, said later that Cicilline’s summary of his actions and statements were false and asked they be stricken from the official impeachment trial records.

“The evidence is clear. Shortly after 2 p.m., as the siege was fully underway, then-President Trump made a call. This is the first call, that we are aware, he made to anyone inside the Capitol during the attack,” Cicilline began when submitting the evidence. “He didn’t call the Vice President to ask how he could help defend the Capitol. He didn’t call the next two in line of succession to the presidency to check on their safety or well-being. Instead, he attempted to call Sen. Tuberville.”

“He dialed Sen. Lee by accident. As Sen. Lee describes it, he had just ended a prayer with his colleagues here in the Senate chamber and the phone rang. It was Donald Trump. Sen. Lee explained it, the phone call goes something like this: ‘Hey Tommy,’ Trump asks. Sen. Lee says, ‘This isn’t Tommy’ and he hands the phone to Sen. Tuberville,” he continued.

“Sen. Lee then confirmed he stood by as Sen. Tuberville and President Trump spoke on the phone,” Cicilline said. “And on that call, Donald Trump reportedly asked Sen. Tuberville to make additional objections to the certification process.”

“That’s why he called. Let’s be clear: At roughly 2 p.m., when Donald Trump was walking around the White House, watching the T.V. delighted and spent 5 to 10 minutes talking to Sen. Tuberville, urging him to delay the certification results, this is what was happening in the Capitol,” he said.

You can see his statement here  —

CLIP: @RepCicilline points to President Trump's first call to anyone inside the Capitol during the attack on January 6: "He attempted to call Senator Tuberville. He dialed Senator Lee by accident…"

Sen. Lee would later move the phone conversation be stricken from the record. pic.twitter.com/IyBTgLmfYy

Just moments later, as the day’s proceedings were called to an end, Lee objected to the Senate president.

“Statements were attributed to me moments ago by the House impeachment manager, statements related to the content of conversations between — er, a phone call involving President Trump and Sen. Tuberville — were not made by me.”

“They’re not accurate, and they’re contrary to fact. I move pursuant to rule 16 that they be stricken from the record,” Lee said in his objection.

.@SenMikeLee says statements made by House Impeachment Managers regarding phone call involving President Trump and Senator Tuberville "were not made by be, they're not accurate, and they're contrary to fact. I move…that they be stricken from the record."