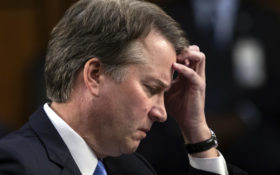 A lawyer hired by Minnesota Democrats to investigate accusations of domestic abuse from an ex-girlfriend of Minnesota Rep. Keith Ellison says she is unable to substantiate the accusations because the former girlfriend refused to provide video she said she had of the incident.

Ellison’s accuser, Karen Monahan, has provided medical records, a summary of her therapist notes, and text messages between her and Ellison — but the lawyer who cleared Ellison refused to investigate the claims further because, “An allegation standing alone is not necessarily sufficient to conclude that conduct occurred.”

For the last two weeks, Democrats have been up in arms over uncorroborated accusations of sexual misconduct against Supreme Court nominee Brett Kavanaugh… but they were radio silent when it came to accusations of domestic abuse by a fellow Democrat.

The Democratic party launched an investigation into Monahan’s accusations after she alleged in August that the Democratic congressman dragged her off a bed by her feet while screaming obscenities at her in 2016.

The lawyer who cleared Ellison reportedly has close ties with the Democratic party. Susan Ellingstad is a partner of a law firm that has donated over $500,000 to Democrats since 1998, with roughly $50,000 of that going toward the congressman running for the state’s attorney general position.

In her report, Ellingstad asserted that her reasoning for clearing Ellison’s name was Monahan’s refusal to produce the video footage of the allegedly abuse.

“An allegation standing alone is not necessarily sufficient to conclude that conduct occurred, particularly where the accusing party declines to produce supporting evidence that she herself asserts exists,” Ellingstad wrote.

Kavanaugh’s top accuser, Christine Blasey Ford, testified before the Senate panel last Thursday without any evidence.  There were also many witness testimonies claiming her allegations against Kavanaugh were false or incorrect.

Without any evidence — and several holes in her story — Ford was still able to have her accusations investigated by the FBI this week.

And yet, Monahan has produced evidence and records to indicate further investigation is needed.

Where is the FBI investigation into her claims? Why are Democrats only supportive of accusations if they are against Republicans?

On Monday, Monahan tweeted, “This is #whyididnttell and I said it from the beginning, I didn’t expect to be heard, believed or validated.” She said she shared plenty of evidence, including medical records and a summary from her therapist as well as text messages between her and Ellison.

threatening statement, if I were to go public, and I shared much more. This is #whyididnttell and I said it from the beginning, I didn't expect to be heard, believed or validated. By the way, my attorney nor I, have seen the report. It was leaked to the AP. There is so much to be

On Monday, Republican U.S. Senate hopeful Karin Housley called for the attorney general’s office to investigate the allegation, saying it could provide “an impartial investigation into the serious allegations.”

Since the report was leaked Monday, the DFL has said it wanted law enforcement to conduct an objective investigation.

Monahan’s attorney, Andrew Parker, has said Monahan would cooperate with any investigation.